Getting to our next stop, Victoria Falls, was a bit of an ordeal. For some reason, we couldn’t just fly from Zanzibar to Victoria Falls. Instead, we flew from Zanzibar back to Nairobi, said goodbye to my aunt (who would be flying home from there), stayed over night at the Four Points hotel at the airport (which was surprisingly nice), got up at 4:15 in the morning, back to the airport, caught a flight to Livingstone, Zambia, entered Zambia, got driven across the bridge over the Zambezi River to Zimbabwe and entered there. We got to Batonka late morning, exhausted.

Batonka is a nice, new (2016) property with 23 rooms, a good restaurant and a nice, refreshing little pool, about 1km from “downtown” and 2km from the Falls. Staff were very friendly and good at providing information and arranging tours, dinner reservations, taxis, etc. All spoke English, though with new accents. 5% of the amount we paid to stay there goes to local conservation and anti-poaching initiatives.

Victoria Falls, population 36,000, is a nice, quiet, clean tourist town, focused on activities around Victoria Falls on the Zambezi, one of the world’s largest waterfalls, and Zambezi National Park. Most of the people here are amaNdebele (related to the amaZulu of South Africa), but Tonga people also live along the river in both Zimbabwe and Zambia, and there are lots of Shona, the largest group in Zimbabwe.

We really wanted to do nothing more after arriving than rest, but we had already scheduled two more activities for after we arrived. First, we went on a tour of Victoria Falls – the actual waterfalls themselves. We walked around paths around the edge of the Falls to various viewpoints. The Falls were stunning, the scale of them was immense. Even though it was the dry season and large areas of the Falls that would be covered with water at other times were dry, there was still a huge amount of water moving through there. Our guide said it’s actually better not to come see them at the wettest times because then you can’t see anything besides a wall of mist and spray. As it was, we got to see a bunch of different parts of the Falls from all different viewpoints, and even walked through a section where spray from the waterfall was falling like rain and soaking everything. It was quite nice with how hot it was. 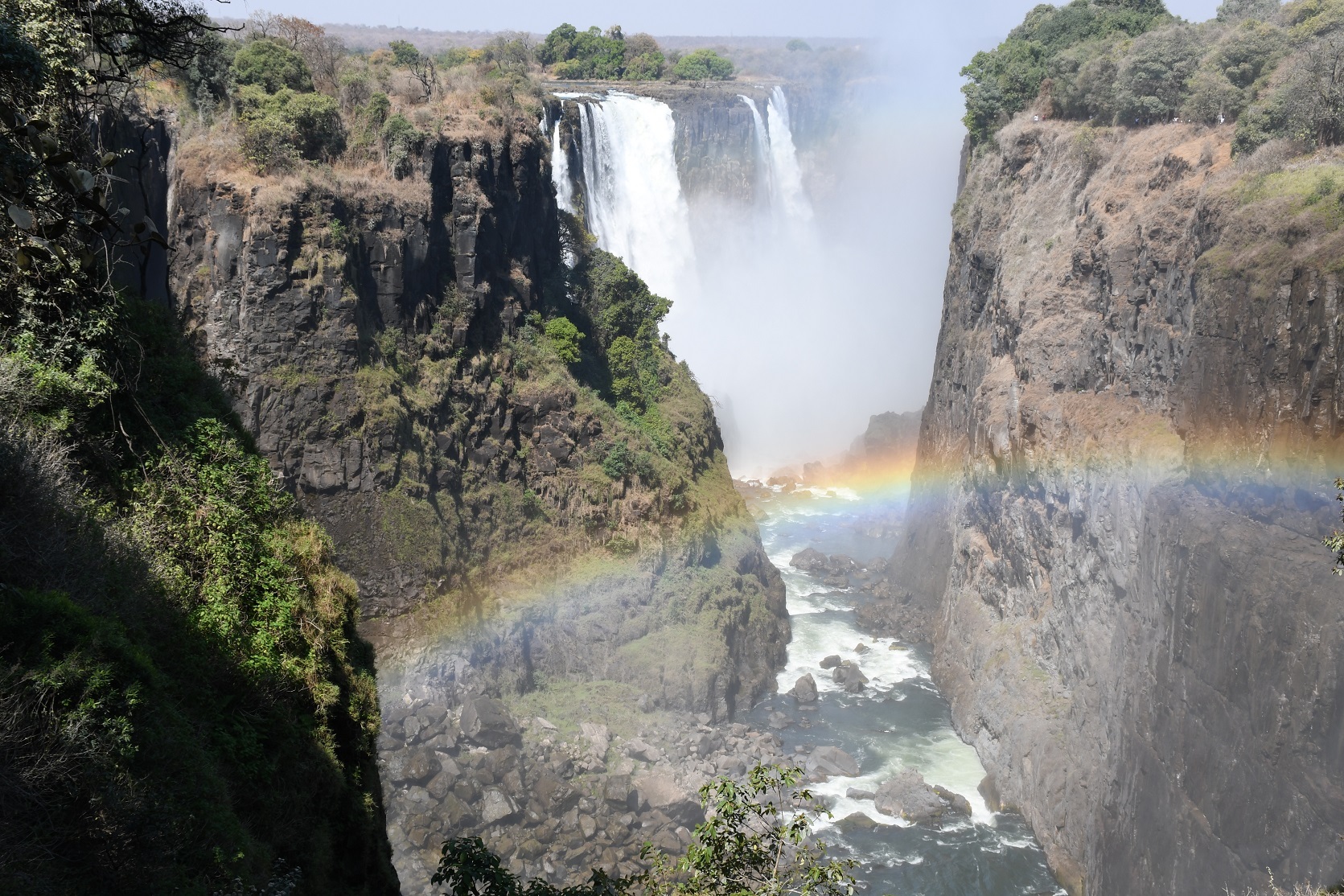 The second activity we did not too long after was going on a sundowner cruise along the Zambezi River. The Zambezi is the river that flows over Victoria Falls, and it’s the fifth-largest river in Africa. Fortunately, we didn’t go anywhere near the Falls. We took a long cruise on a big covered boat with tables where we got drinks and snacks. Including some pretty unusual snacks, like crocodile kebabs. That was the first time I had ever eaten any reptile, let alone crocodile. It actually tasted fine, I would’ve thought it was some kind of poultry, and never guessed what it actually was.

During the cruise we got to see some pretty scenery, and we saw crocodiles laying on the shores a couple of times, and hippos in the water. We were able to get pretty close to the hippos and got a good look at them. They were just as big, weird-looking, and intimidating as ever, but it was cool (and a bit scary) to get so close.

The second day, by contrast, we didn’t really have anything planned, so we just relaxed, swam in the hotel pool, went into town to do some shopping, my parents went beer tasting at a local brewery where we also had lunch and watched part of a Rugby World Cup game, and I wrote some of the previous blog entries. We probably could’ve scheduled this part of the trip better.

Next, we drop off the grid for a week or so, as we go mobile camping with & Beyond in northern Botswana. But I’ll keep writing and try to post more from Johannesburg or Amsterdam airports on the way home. 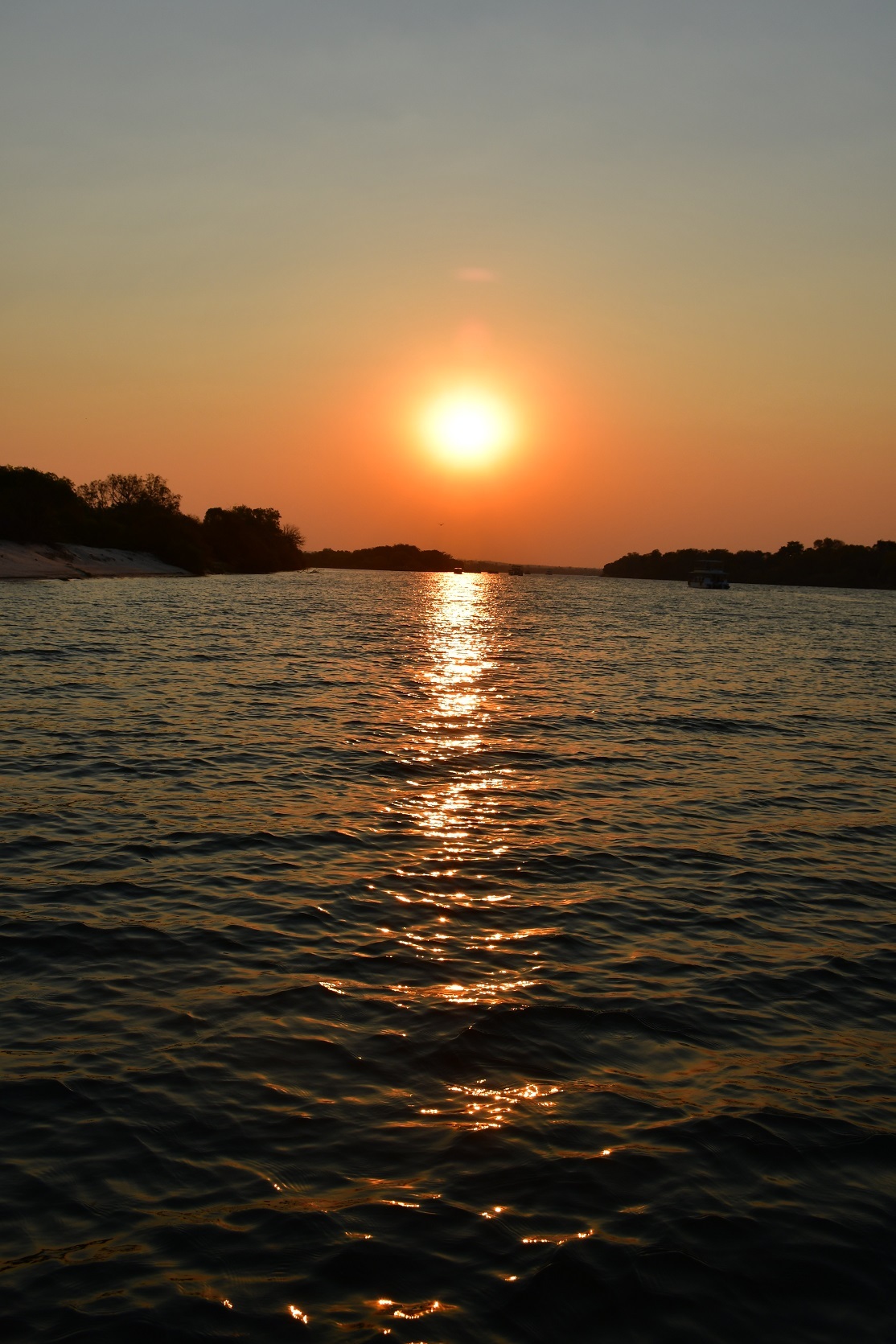