One of our agents Craig was invited by Air Canada to go on a FAM (Familiarization) trip to China for 8 days visiting the Fujian province and Shanghai. Read about Craig’s experience below.

“AC wanted us to experience their new 787 Dreamliner. We flew in Premium Economy class to Shanghai and then luckily we were upgraded to Business Class on the return. The

Dreamliner is a nice new aircraft and has larger windows that are adjustable to go darker and lighter with a dimmer switch, no pull down shades here! 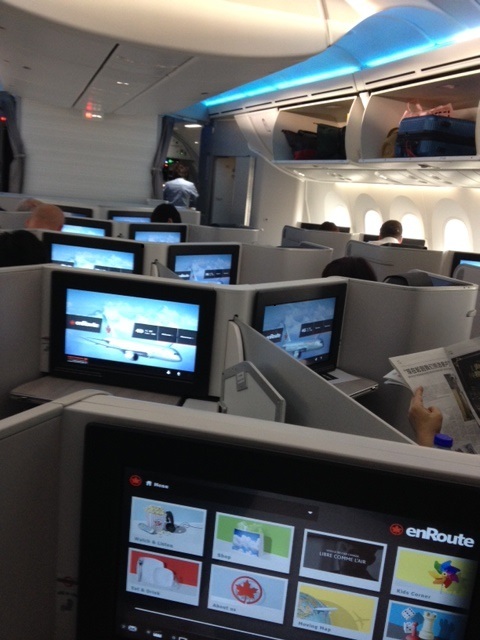 Premium Economy was a nice upgrade and definitely worth doing if you can afford it. On some routes the difference in price really isn’t that much!

The return on Business Class as you can imagine was great! It included a fully lie-flat bed and a very large high definition TV, just to name a couple of great perks.

We flew into Shanghai and took 3 domestic flights within China which included Shanghai Airlines, China Eastern and Xiamen Airways. These flights were good and comparable to flying

domestically with Air Canada or West Jet. All of them had the newer Boeing aircraft.

We spent 4 nights in Fujian province which is in the south. 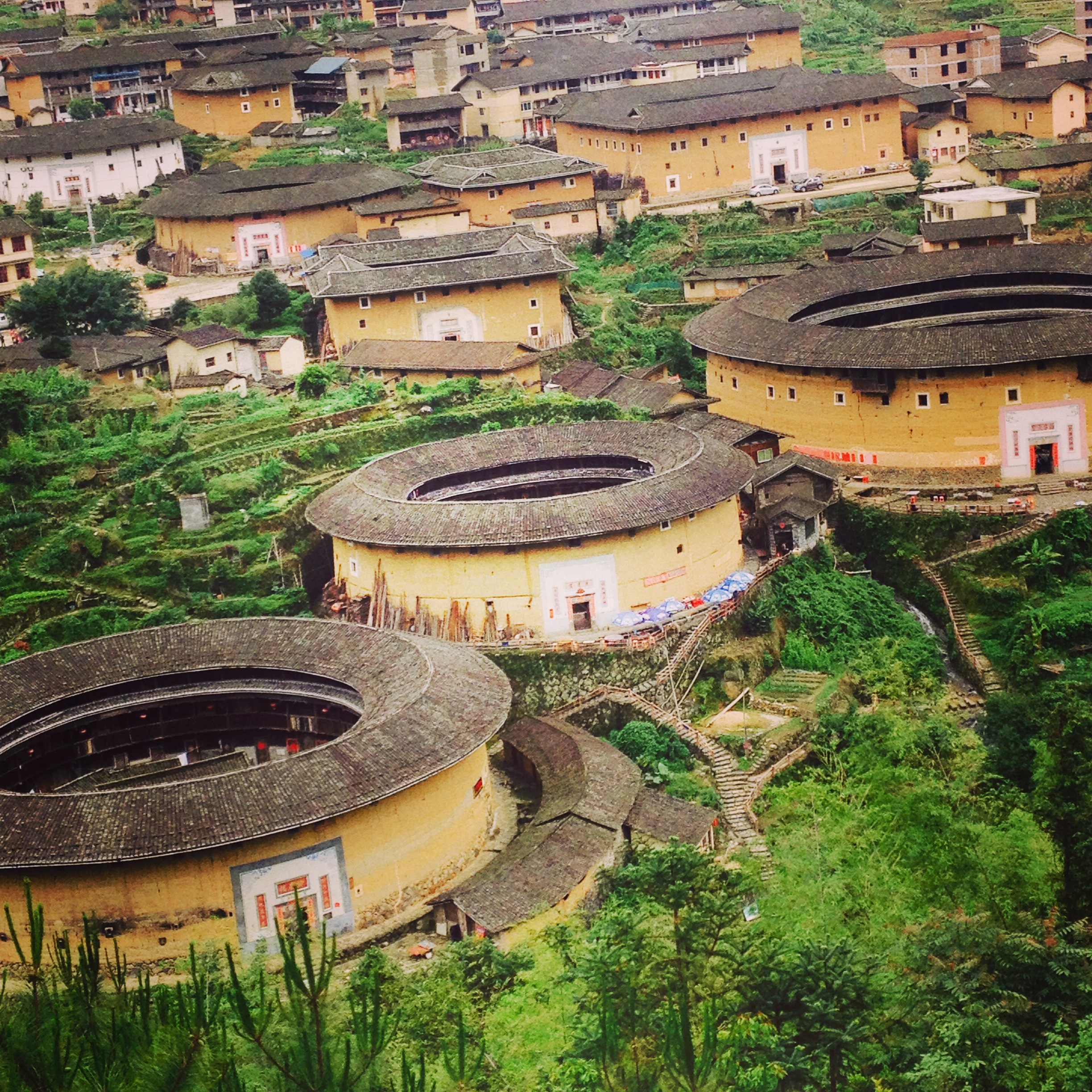 These are the Hakka houses we visited in Fujian province. They are ancient houses
dating back 200 or so years ago. 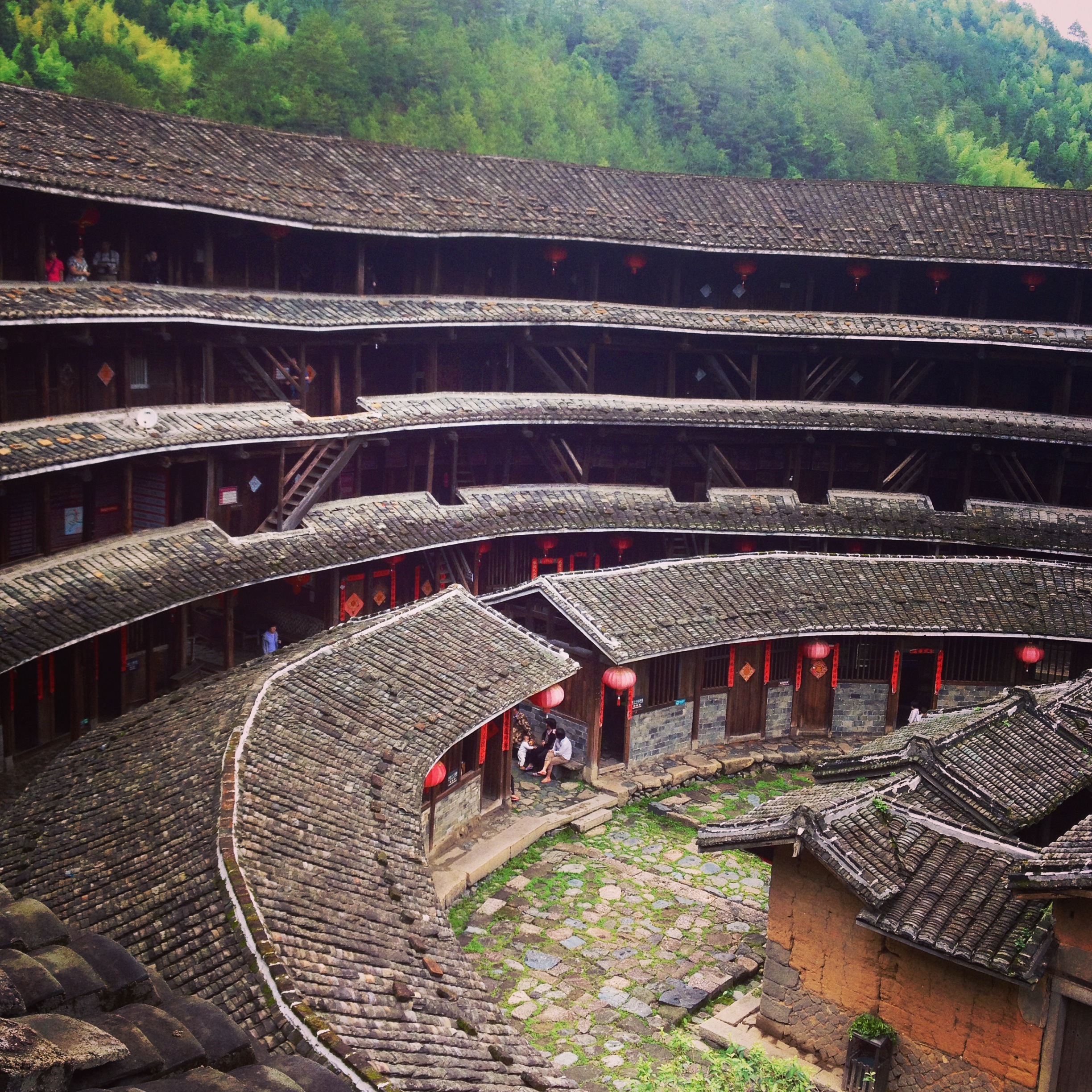 Large numbers of families lived in these houses.

Xiamen is a very nice large port city and we were also in Mount Wuyi. Mount Wuyi is an area that many Chinese tourists like to visit as well. I was the only Caucasian around for many, many miles! It is very beautiful and mountainous with a great outdoorsy feel. Quite an amazing experience I must say. 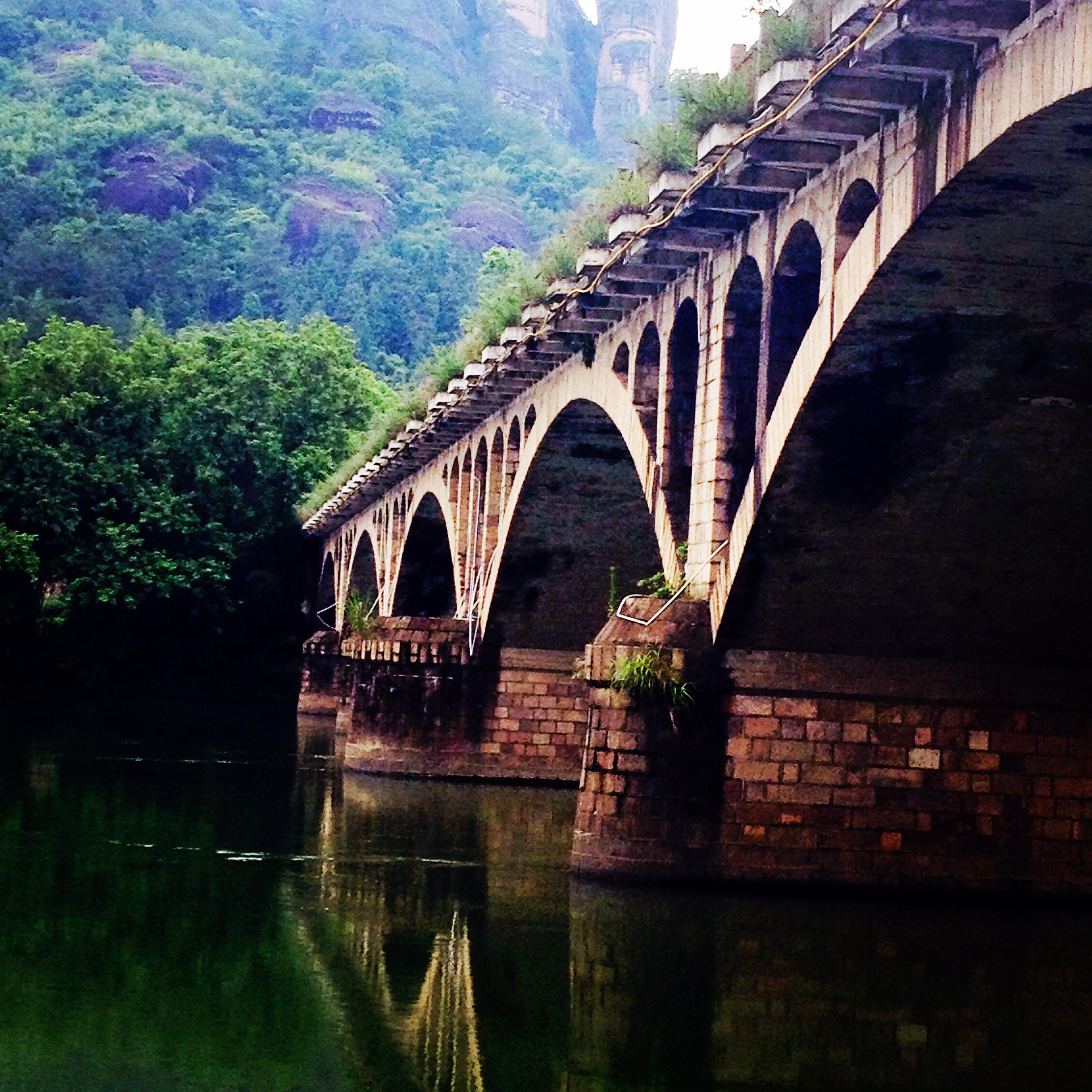 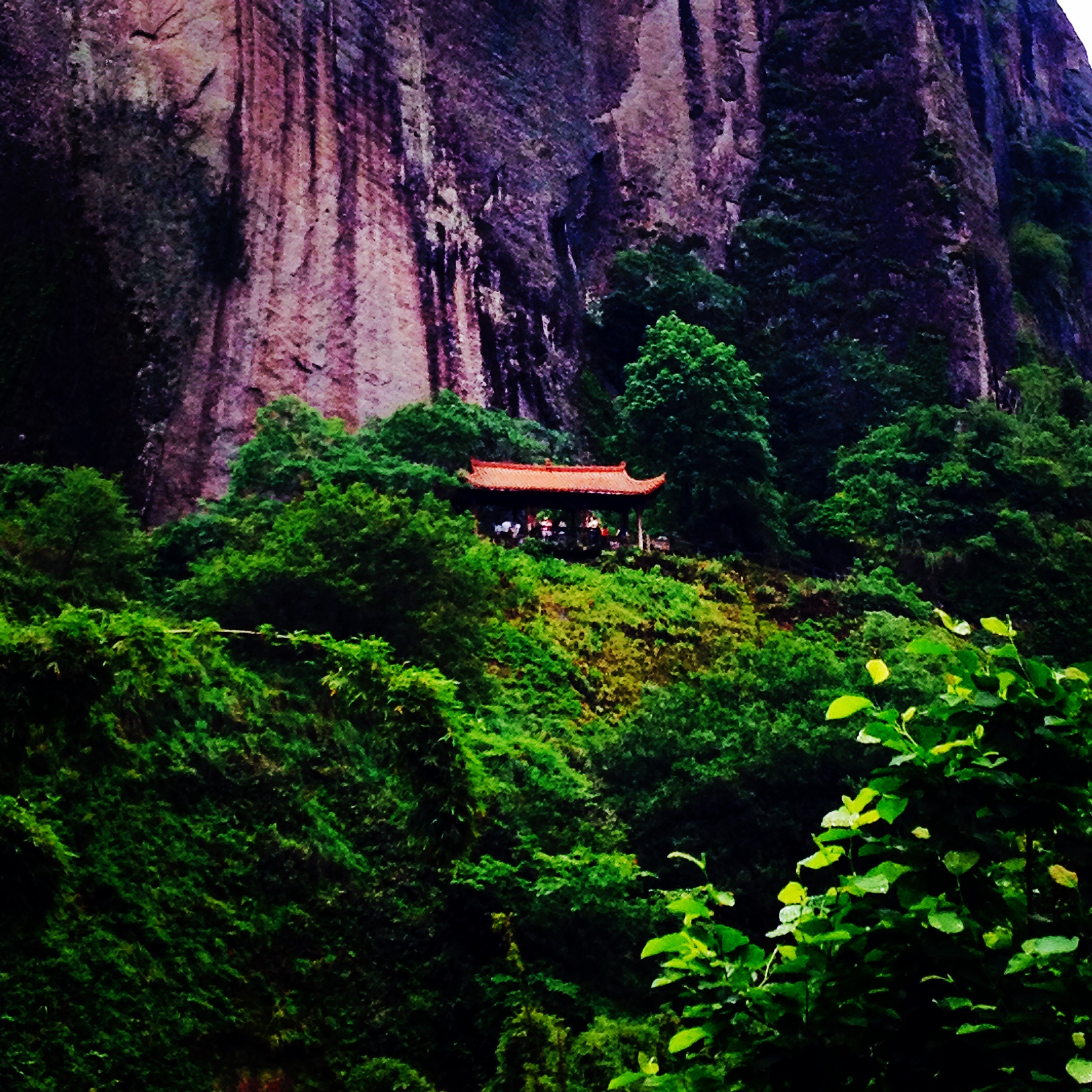 The City of Wuyishyn is up in the mountains and is also a very popular destination with Chinese tourists. It is a very scenic and a peaceful place to visit. 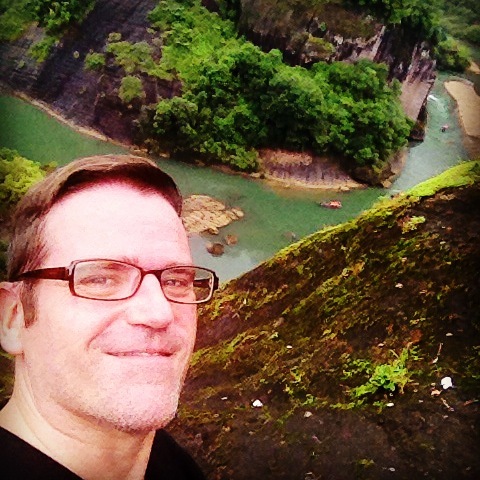 Hiking up Mt. Wuyi in the Fujian Province. 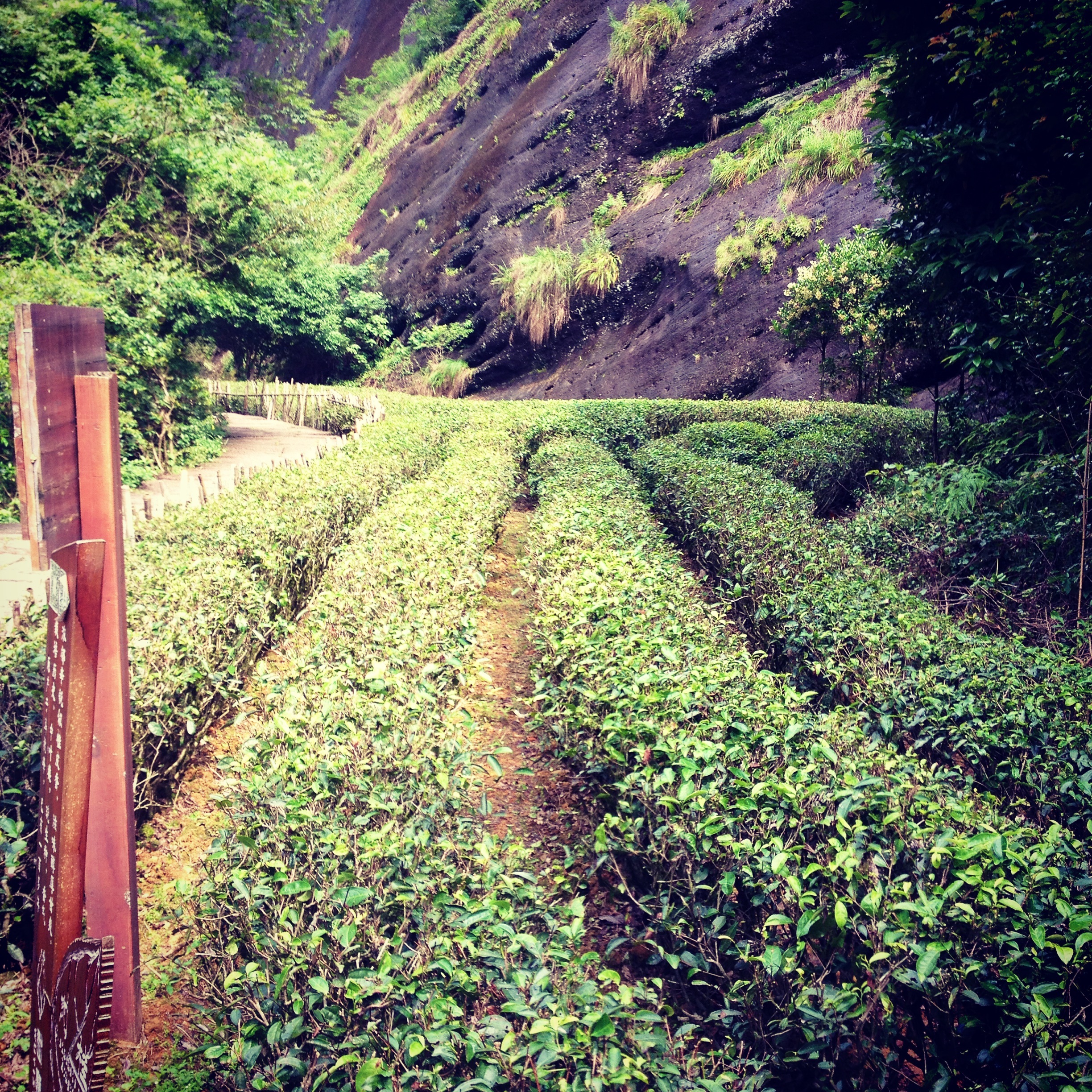 There are beautiful tea groves that grow all over the Mt. Wuyi area of the Fujian Province. For centuries tea has been the major business of this area of China. 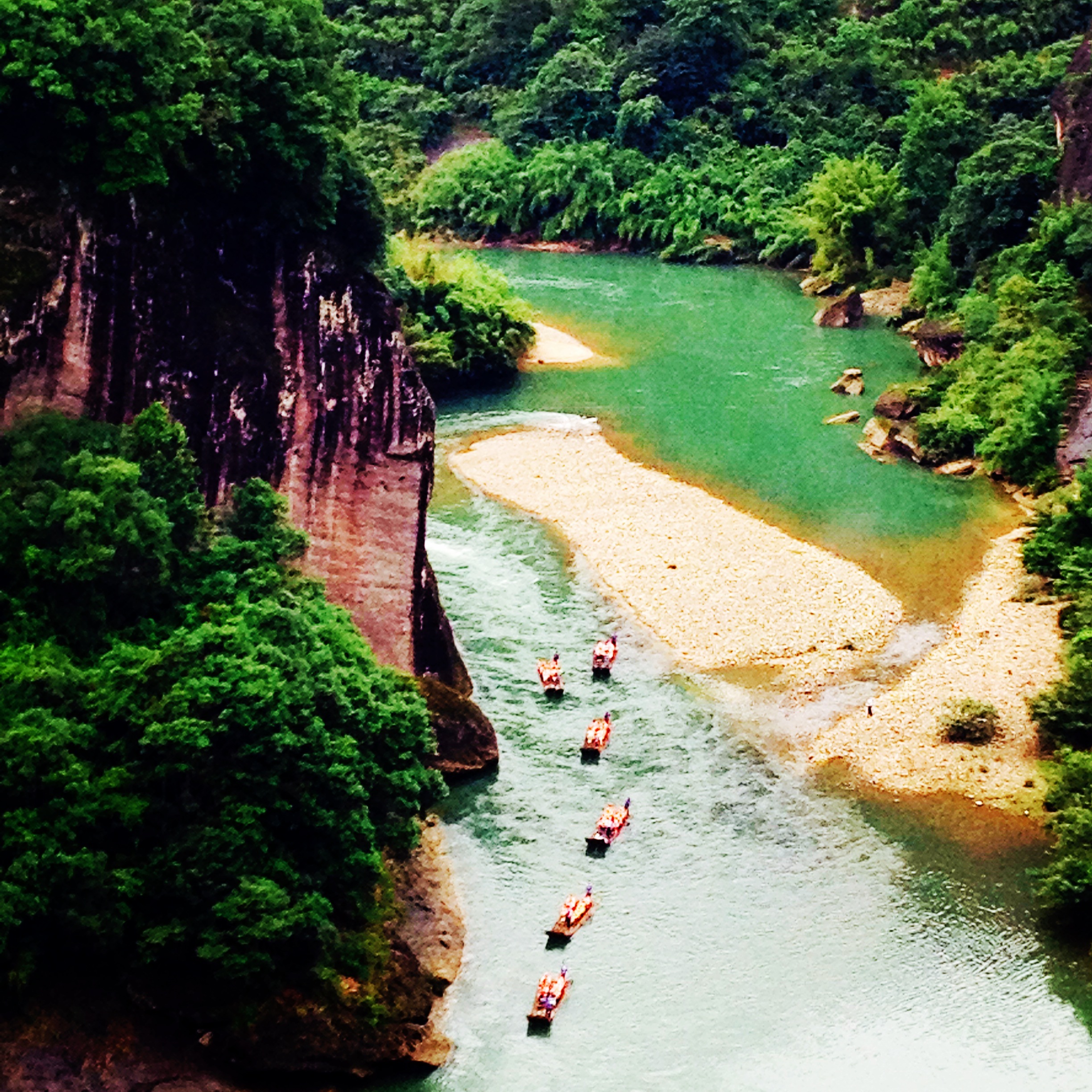 Rafters below in the river. 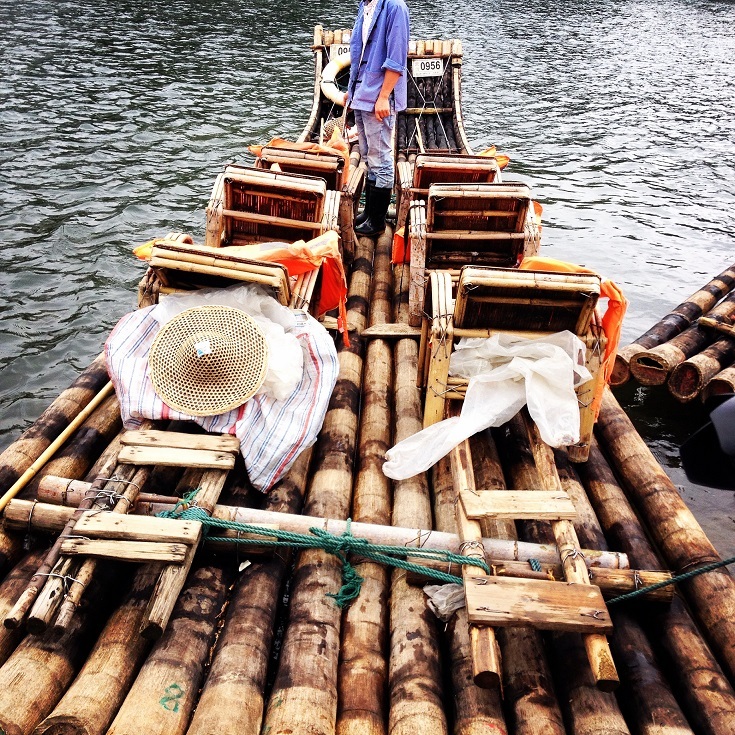 These are the Bamboo rafts you take down the river Jiuqu. We went down the 9 km stretch that has 9 bends.

Shanghai was a great city. It is as huge as you can imagine but very modern and orderly. The Bund, which is also known as the Waitan, is a waterfront area in central Shanghai.

The architecture on the Bund was both modern and historic which was great! 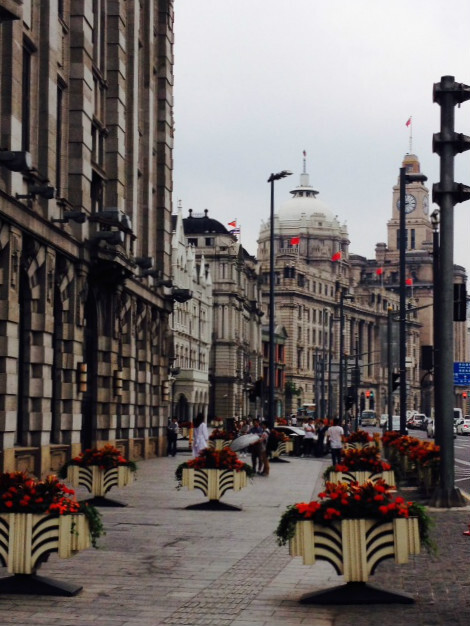 Picture of the historic side of Bund with its beautiful colonial architecture - quite the contrast to the modern side. 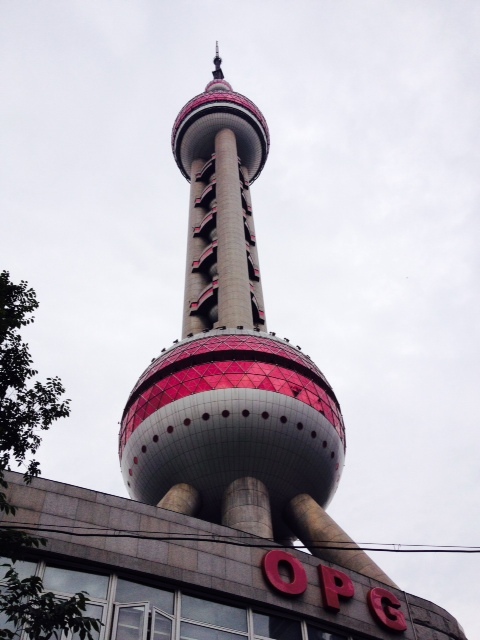 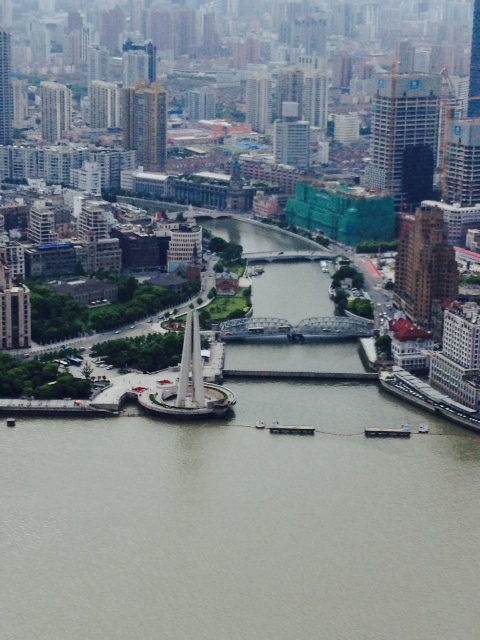 This is the famous TV Tower in the Shanghai Bund District. We went up to the second viewing area which had amazing views of the city.
It's the 20th anniversary of the construction of the tower, which was the first major building to go up on that side of the Bund. 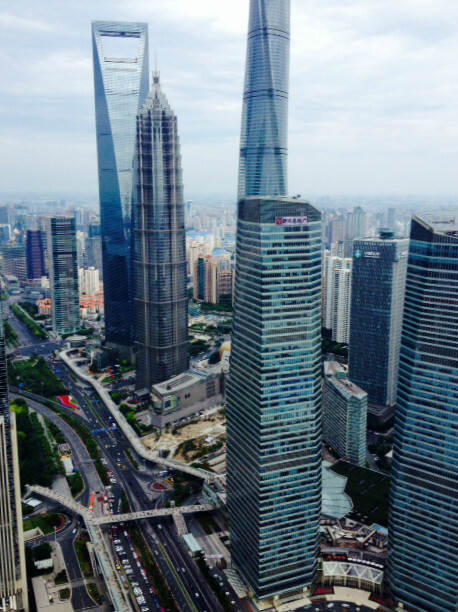 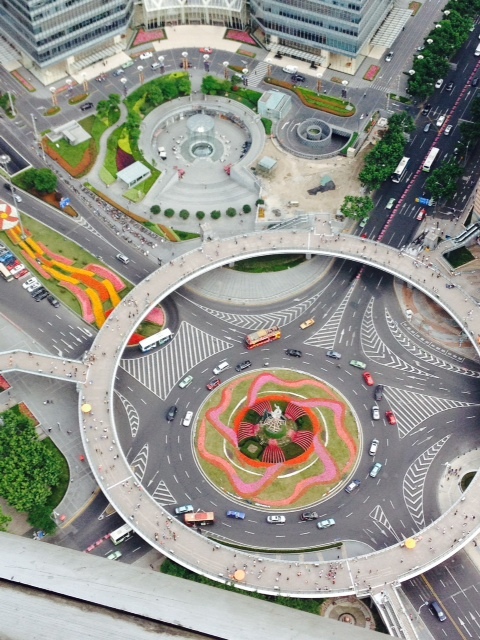 Here you can see another city view and an interesting look through the TV towers glass floor. 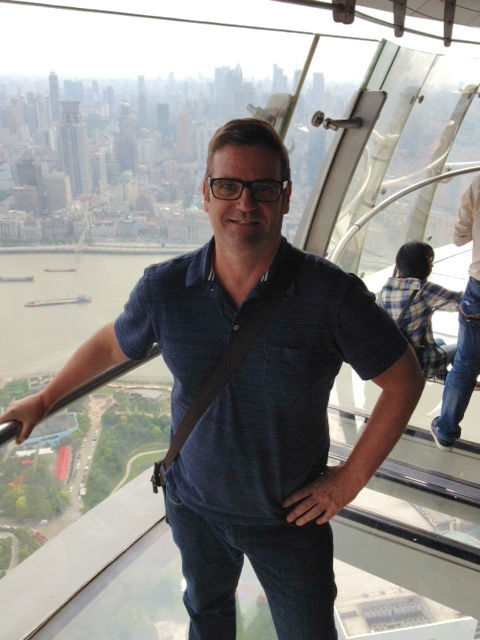 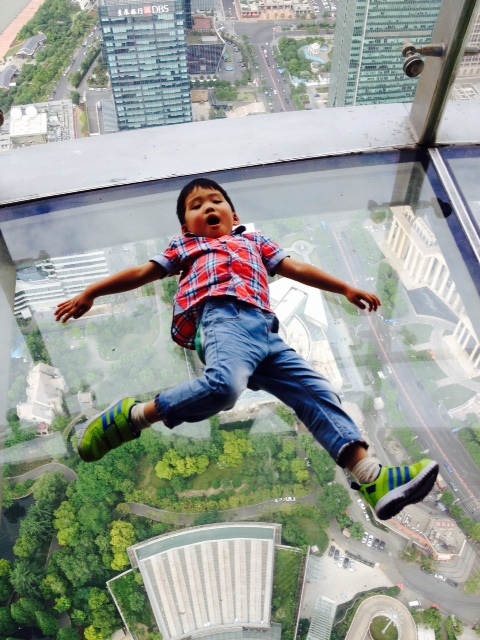 Here's a picture of myself with a great city view in the background and a child having no fear on the TV tower glass floor. 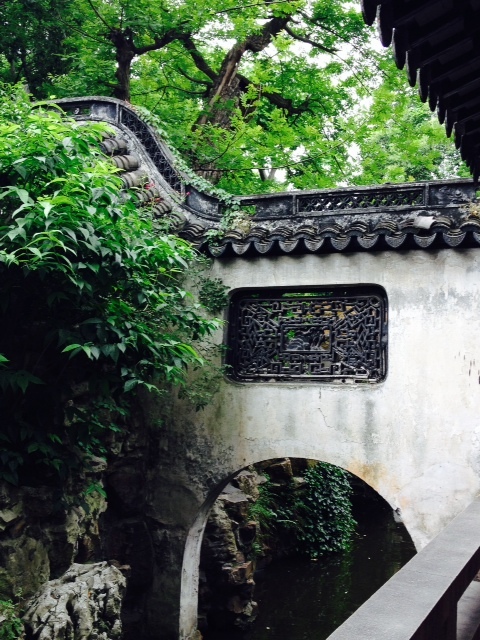 We toured this historic garden in Old Shanghai, it was beautiful!

This was one of the many Chinese dinners we had together. 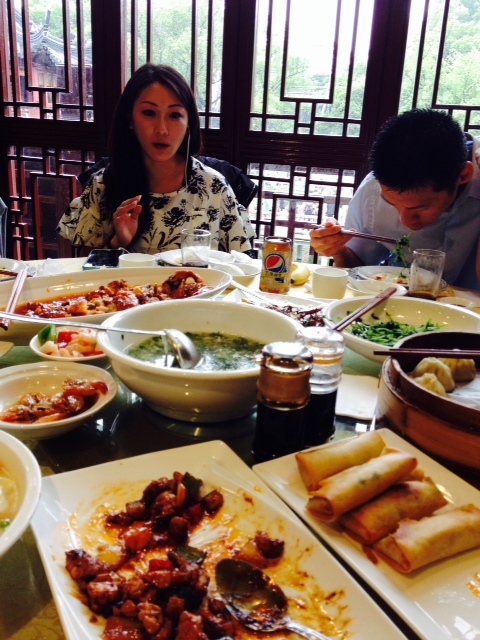 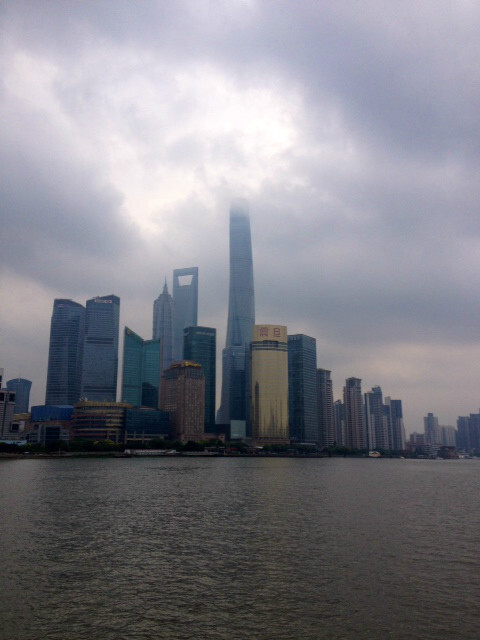 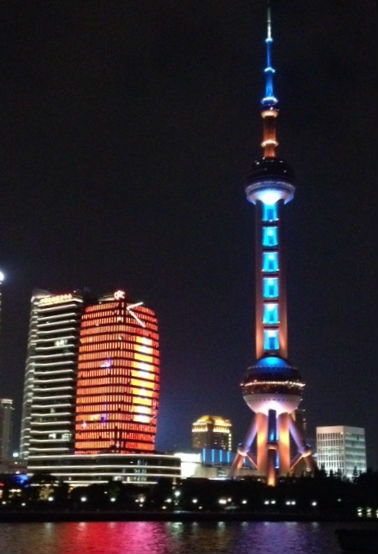 The picture on the top is a skyline view of Shanghai. The photo on the bottom was from a night cruise we took up the Bund. Both sides were lit up with various light shows, it was quite the production!

Overall, I was very impressed with Shanghai, it was definitely worth going to see and experience. We stayed in 4 star hotels throughout our stay and hotels in China tend to be good value compared to Hong Kong or other cities here.The hotel we stayed at in downtown Shanghai was called the Central Hotel and it was great. 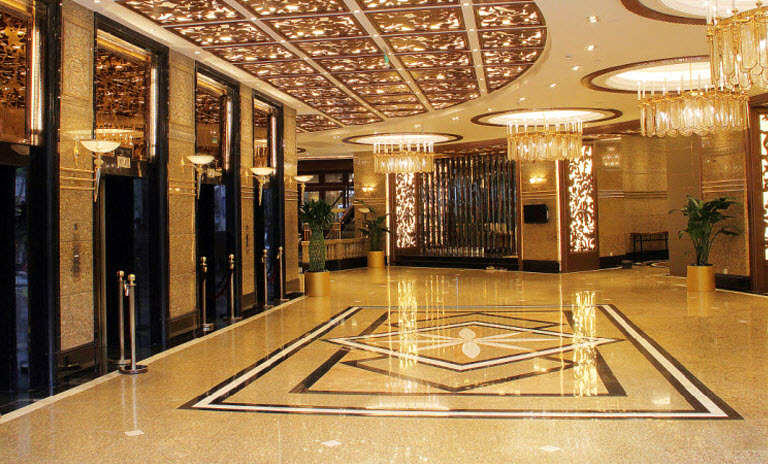 All in all China is an interesting place to visit. This trip certainly opened my eyes to what is there. It’s a huge country and much more modern and civilized than you would think!”