I won the lotto – well kind of – I opened my email on the morning of February 26th and found an invitation from Regent Seven Seas cruises – to save the date. I had been invited to a Pre-Inaugural sailing on the ‘Worlds Most Luxurious Cruise Ship” – the Seven Seas Explorer – it was for myself and a guest – so I guess my husband won the lotto too! 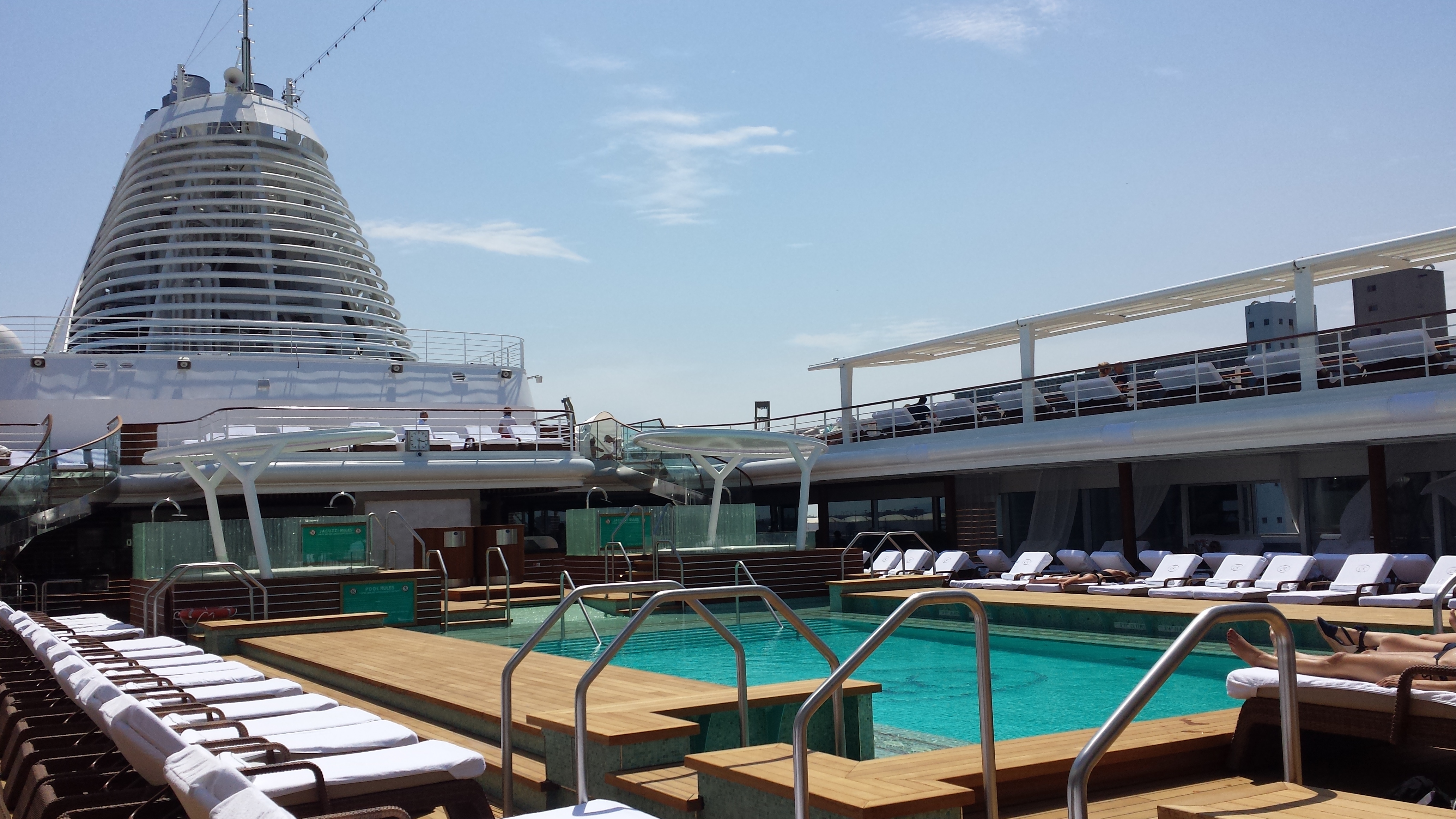 Regent had billed this ship as something so incredible that it most certainly could not live up to the hype – but this is where I found out how wrong I was – We arrived to the Barcelona cruise ship terminal – it was lovely and bright – and much different than what I had remembered from being in Barcelona over 20 years ago. We walked on the ship and were met by many familiar Regent faces – given a glass of champagne and directed to the buffet for lunch. 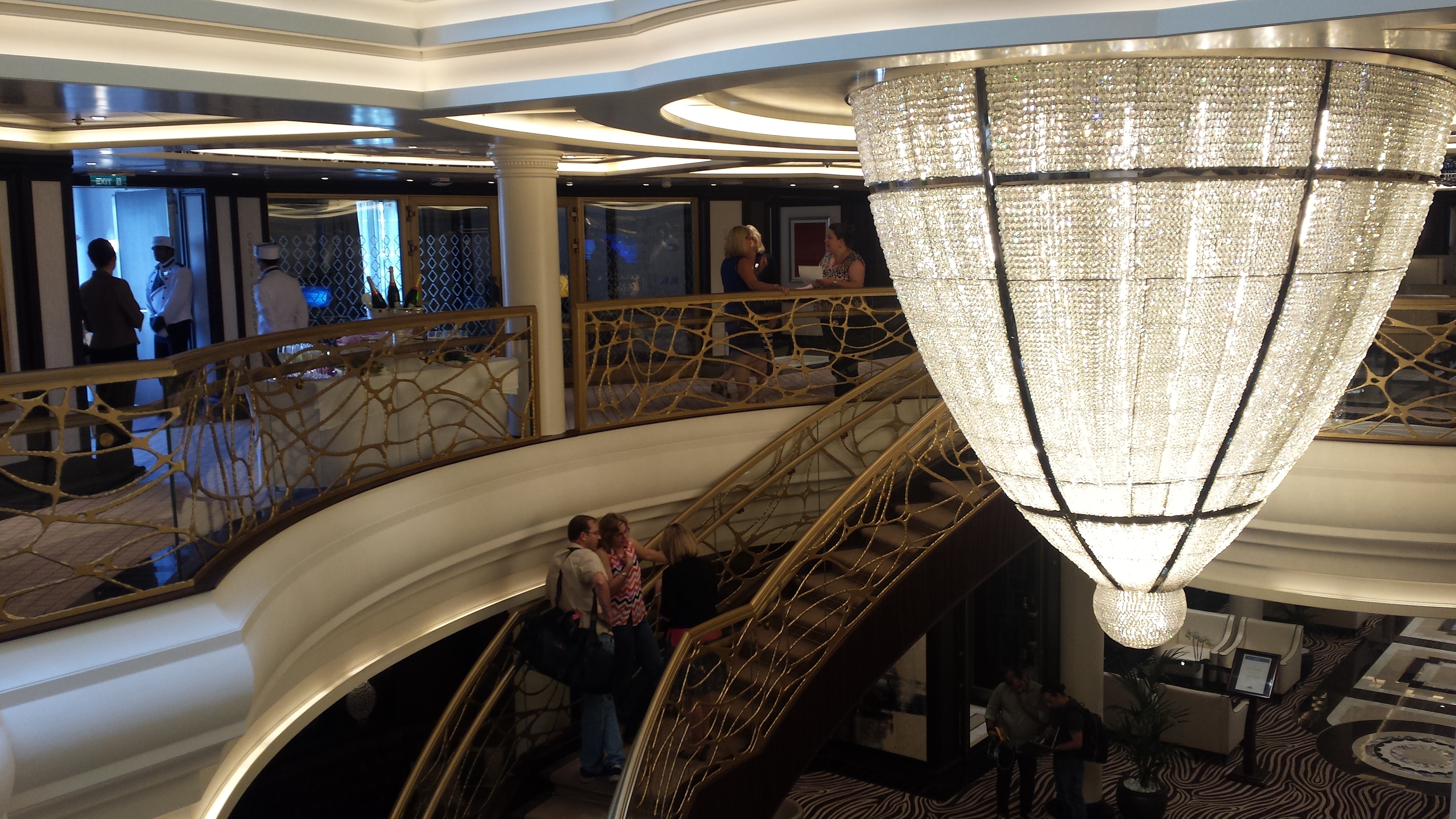 The ship was amazing – one of the first things you see is the magnificent chandelier – from hanging from the Lobby ceiling and spanning down a full deck – quite amazing.The color scheme is much darker than I expected – very rich and lush – a bit on the masculine side – but very well highlighted by all of the chandeliers through out the ship. 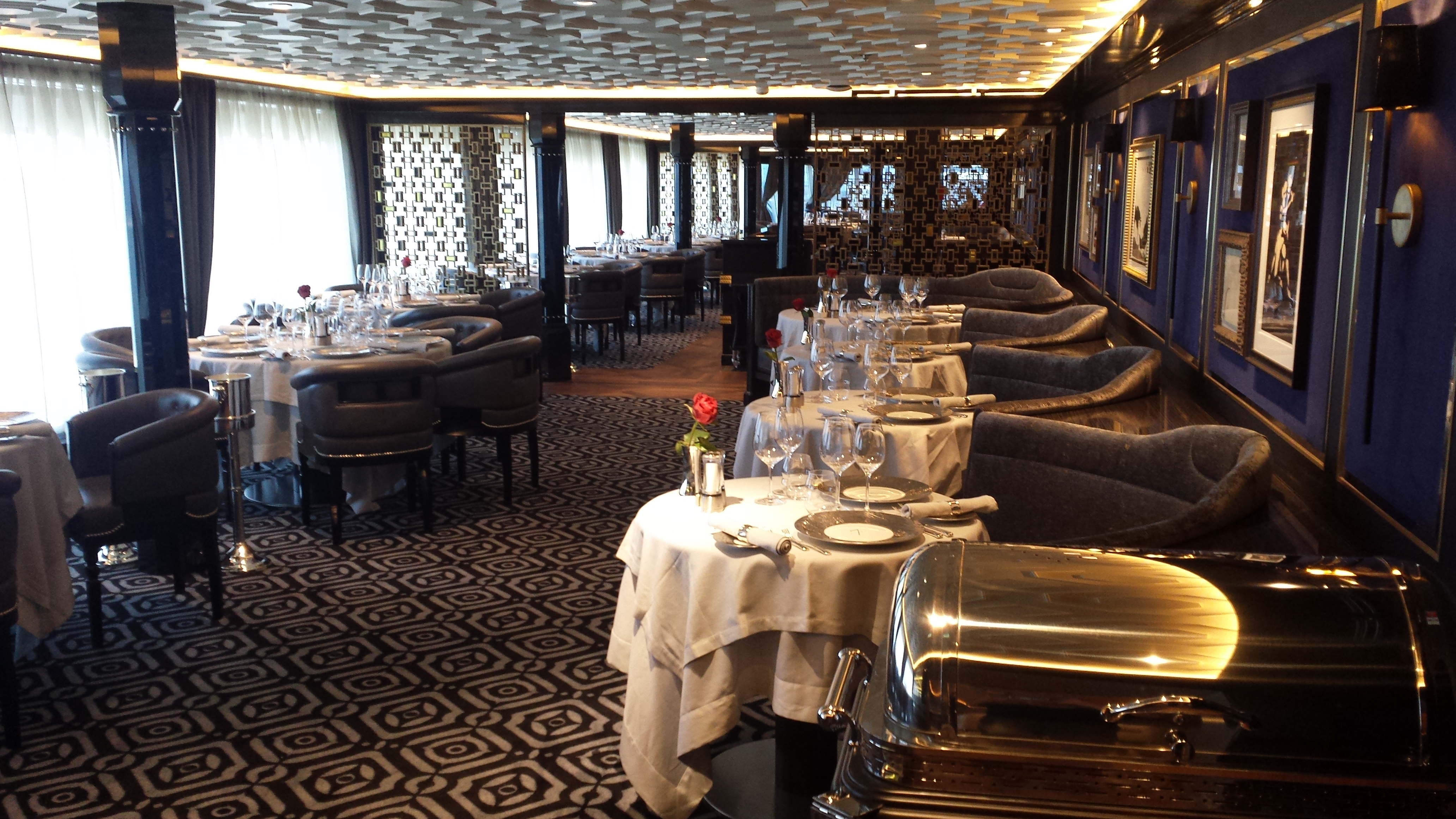 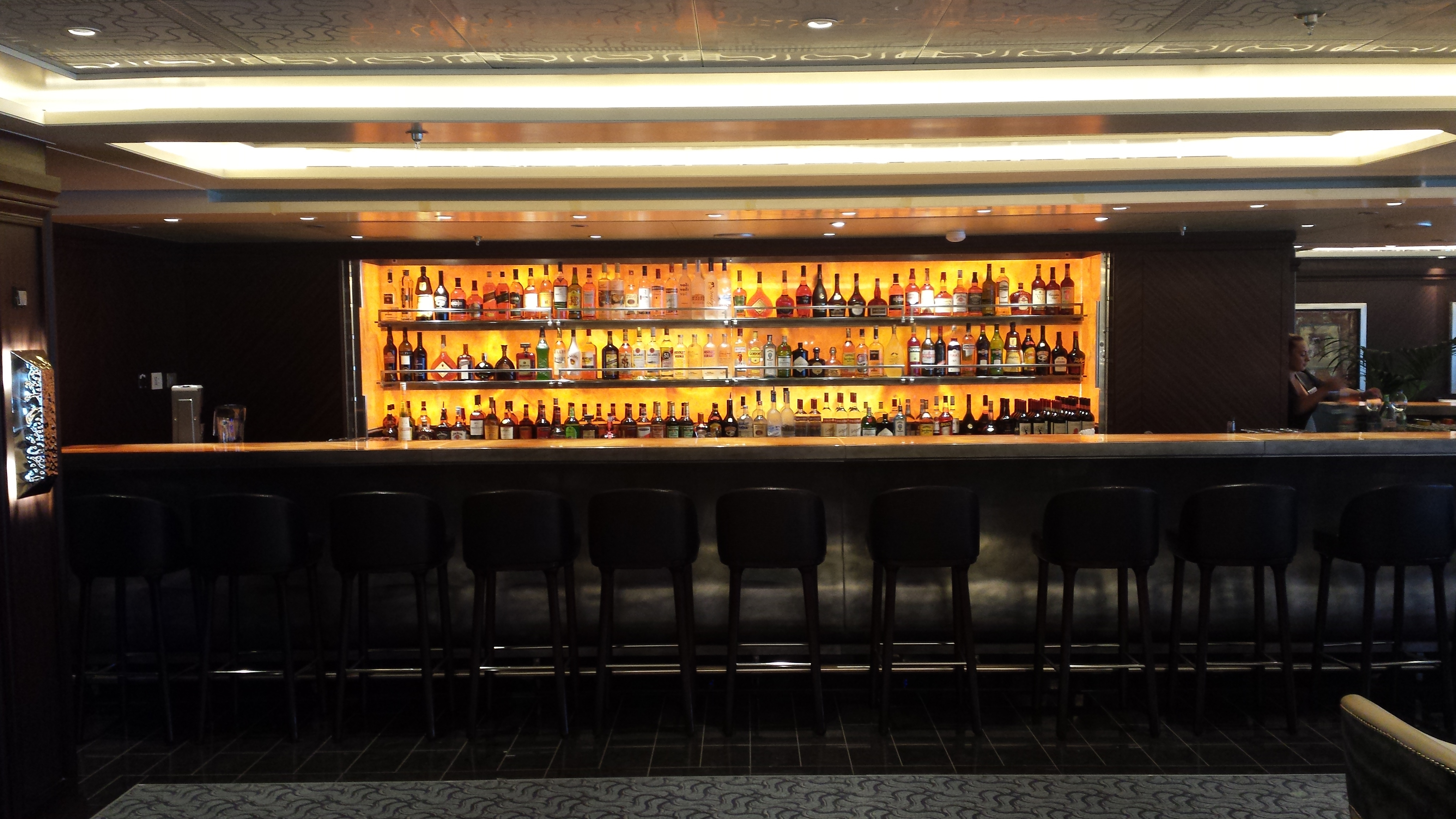 We were confirmed in cabin 1033 – it was a Concierge class cabin with balcony. The difference between this category and the Balcony cabin – is that our balcony was deeper and we also had a lovely Nespresso machine in our cabin. 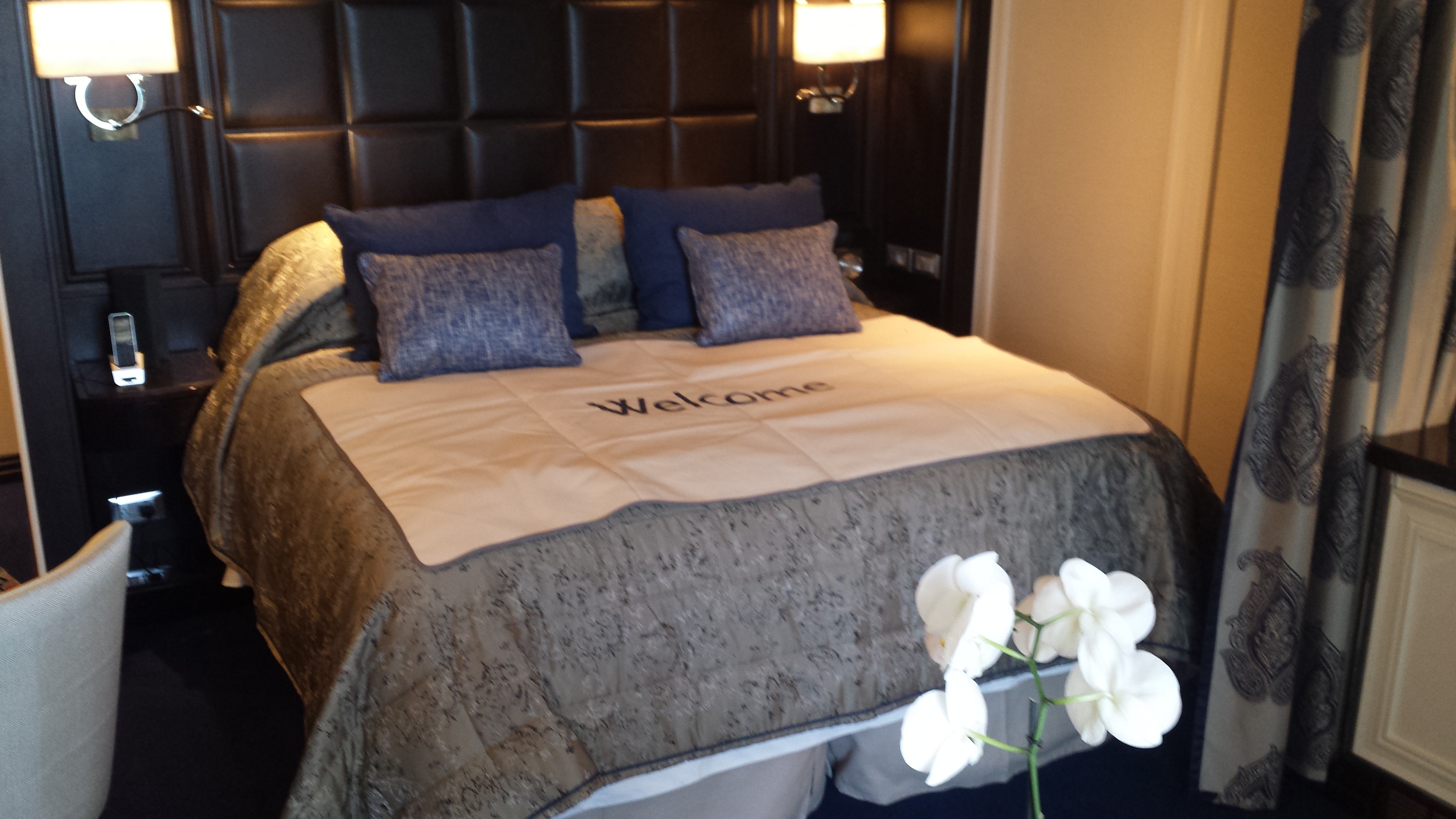 The cabin was wonderful – the bathroom has double sinks – a shower and a separate bathtub – also with a shower head – so we could both have a shower at the same time! The walk in closet was very large and has ample hangers as well as a safe. The colours in the room were very dark and rich – the designer headboard was a dark chocolate brown – the balcony was very large – and we were very happy to have the cabin we were assigned as there were the last cabin in the hallway –next to Prime 7 – so our balcony even though it was rounded on one side – had no obstruction to the right – giving a fabulous sense of space! 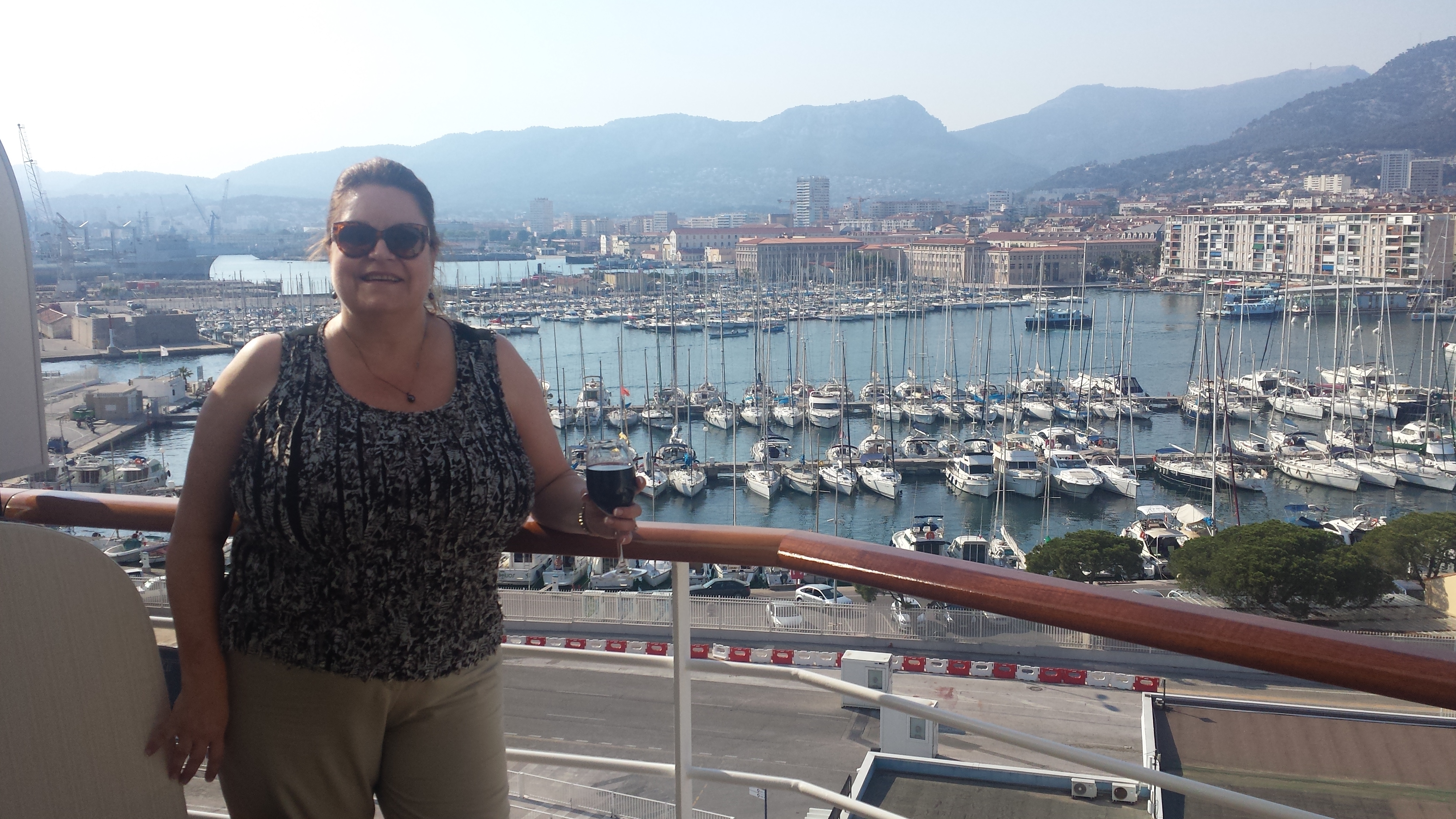 Our cabins were understandably not quite ready so we were invited to go to the buffet – La Veranda – up on Deck 11 – we walked in and were amazed at how beautiful the room was – with the light colours and lovely light fixtures. The buffet had just opened so everything was there ready to taste. 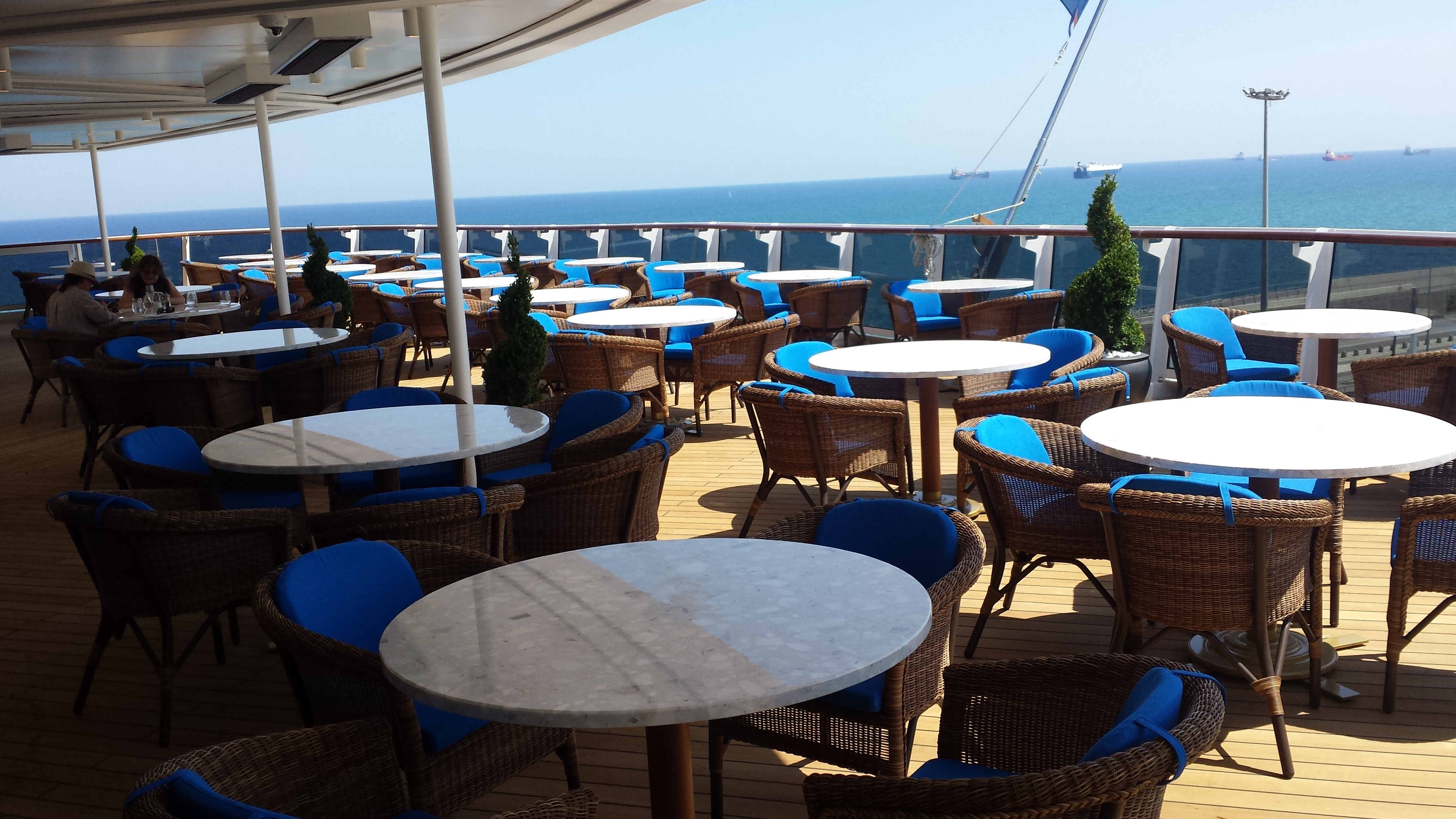 It is a bit of a blur – after a few glasses of complimentary champagne – but I do remember the food was excellent – and the service was fantastic!

The announcement that the cabins were ready was a welcome sound – we proceeded down one deck and immediately started exploring. 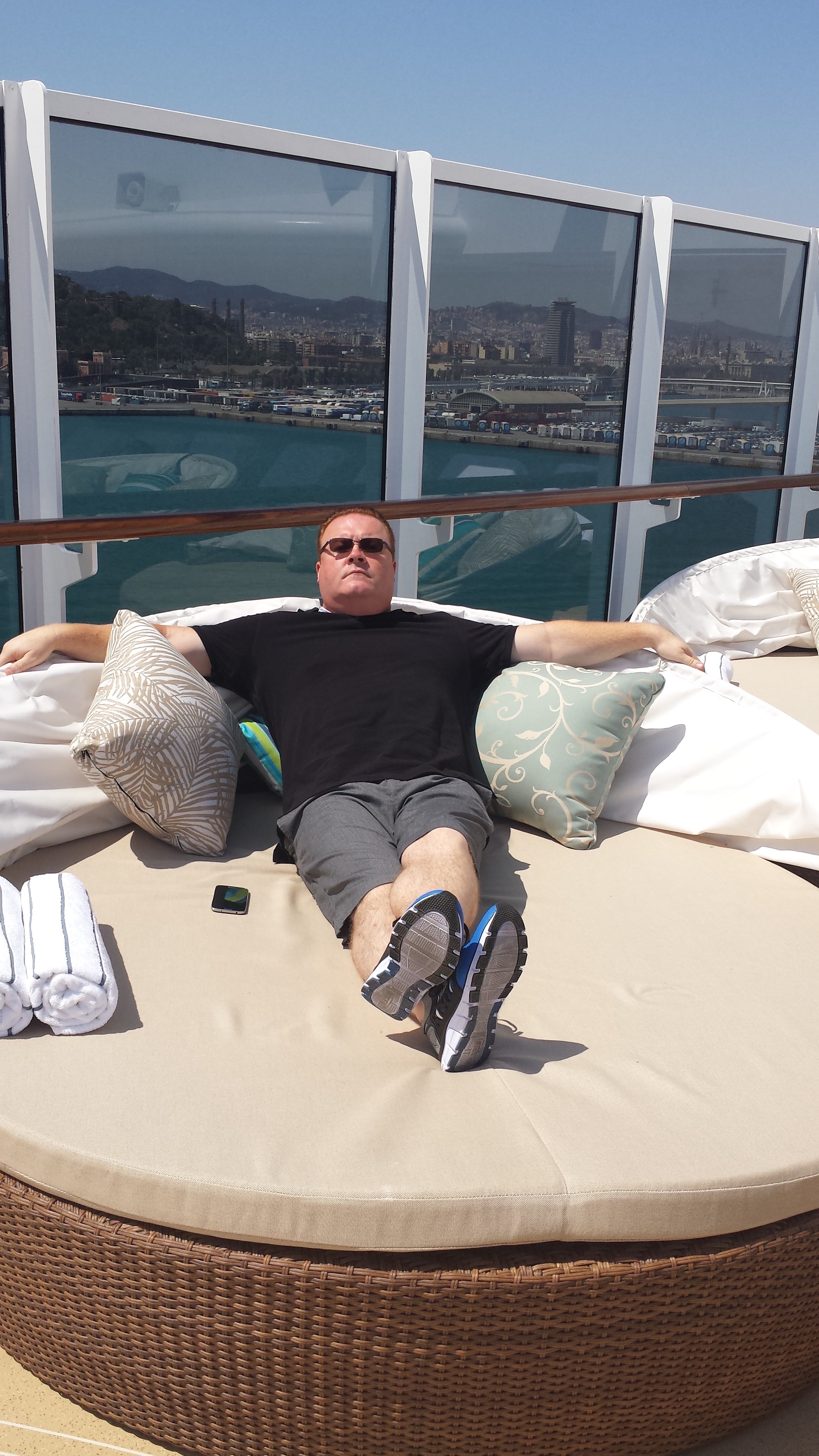 The ship is very well designed – keep in mind – if you like to have a coffee first thing in the morning –you might want to consider a concierge category or above – as they do come with the Nespresso Makers – a definite must on my list. One thing with Regent is the 1st night hallway party – this is where the captain and Cruise director come running down from the Bridge to meet everyone and encourage everyone to comeout in the hallway to meet each other – bring out a glass of cheer and say hello. It was a lot of fun – and they actually video tape the whole process and show it on the last day.

Our first night we had dinner in the Compass Rose – the food was amazing and the service was excellent – we had a table for two by the window – and were very happy with everything. 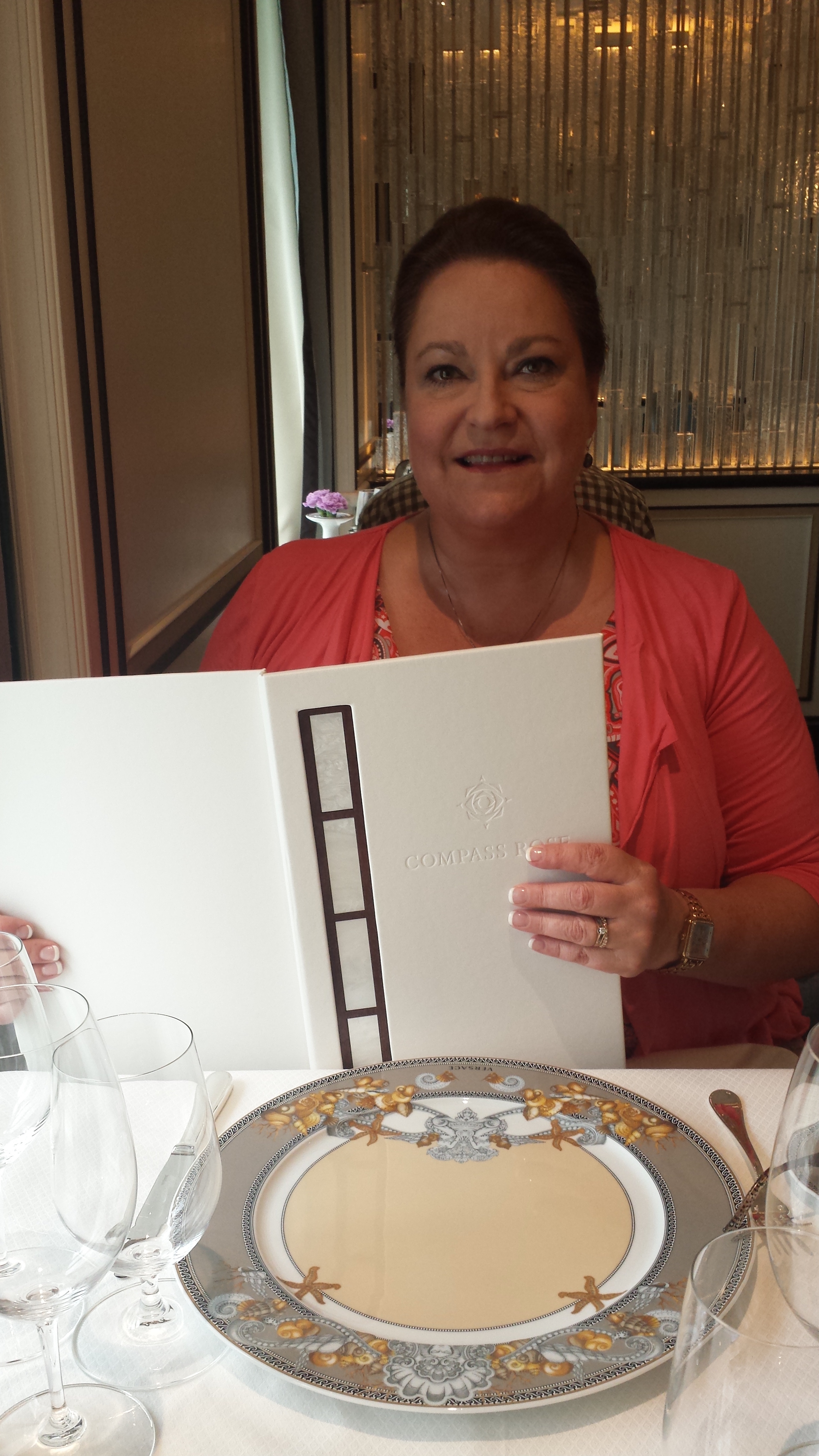 Day two was at Sea – we had a chance to see all of the cabin categories onboard and every cabin we saw was very well laid out – comfortable and spacious. The buzz about the ship was the Regent Suite – it goes for approx.. $10,000 USD per night – but considering the suite is 4,400square feet and has an in suite spa with included unlimited treatments, a sauna, rain shower – and a Savoir bed with Irish linens – rumored to cost 150,000K … The grand piano was also extremely impressive – with exotic inlaid wood – some rumored to be extinct. There are two Picasso’s hanging outside the entrance to the suite – and throughout the ship – the art work and attention to detail was outstanding! It certainly would be a treat of a lifetime to book into that suite! Business Class air and a private car and driver at every port are included of course! 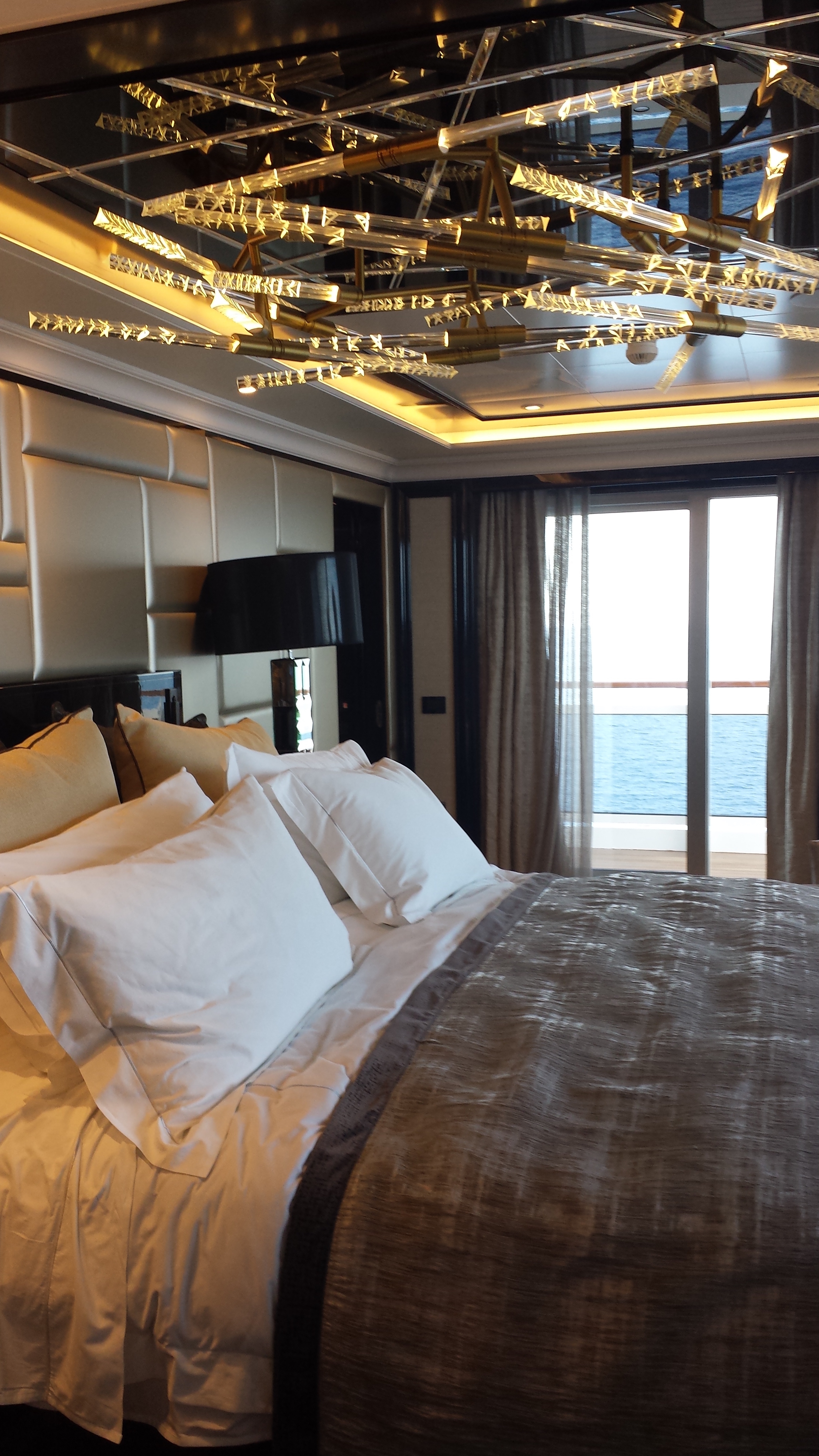 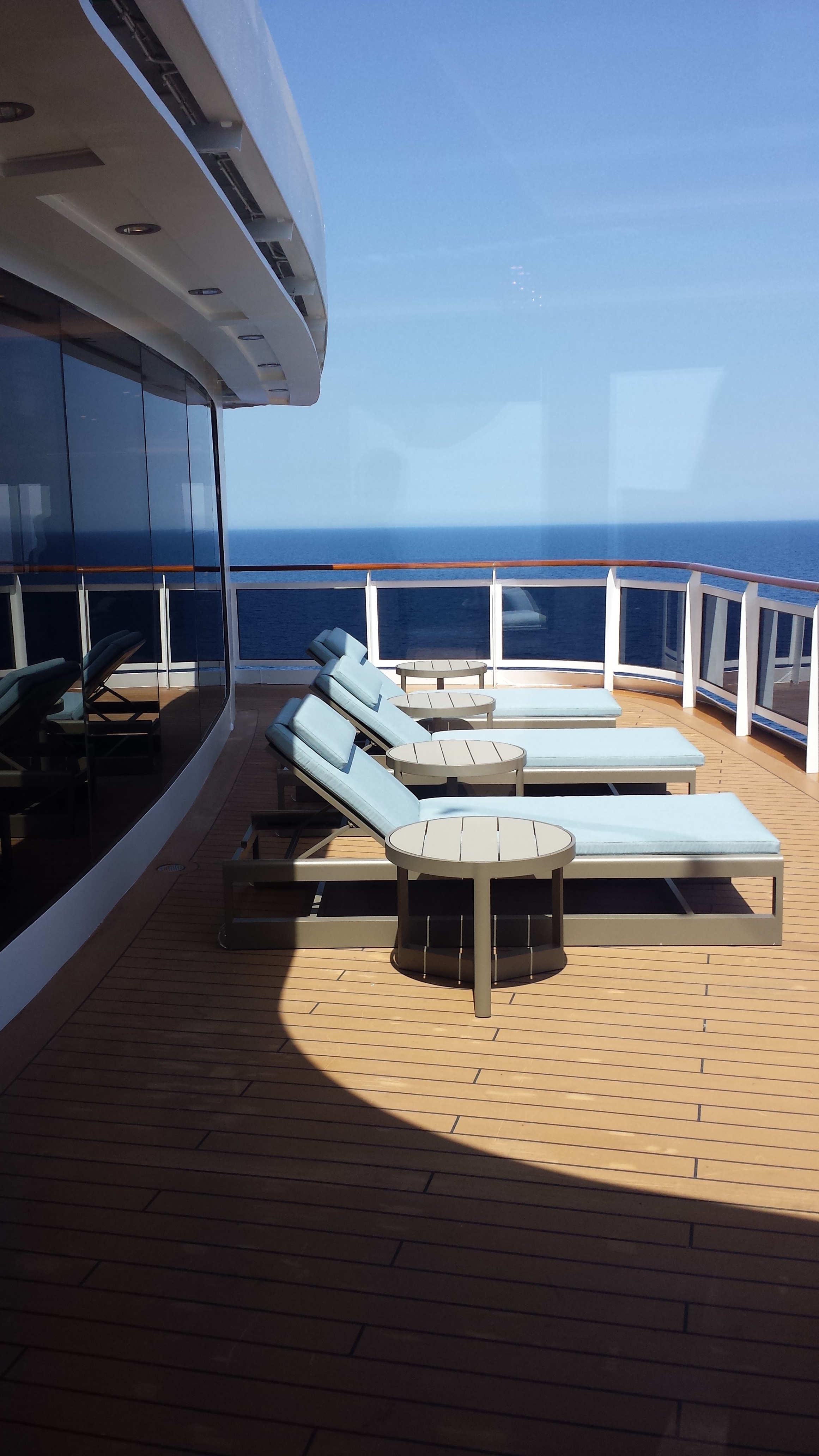 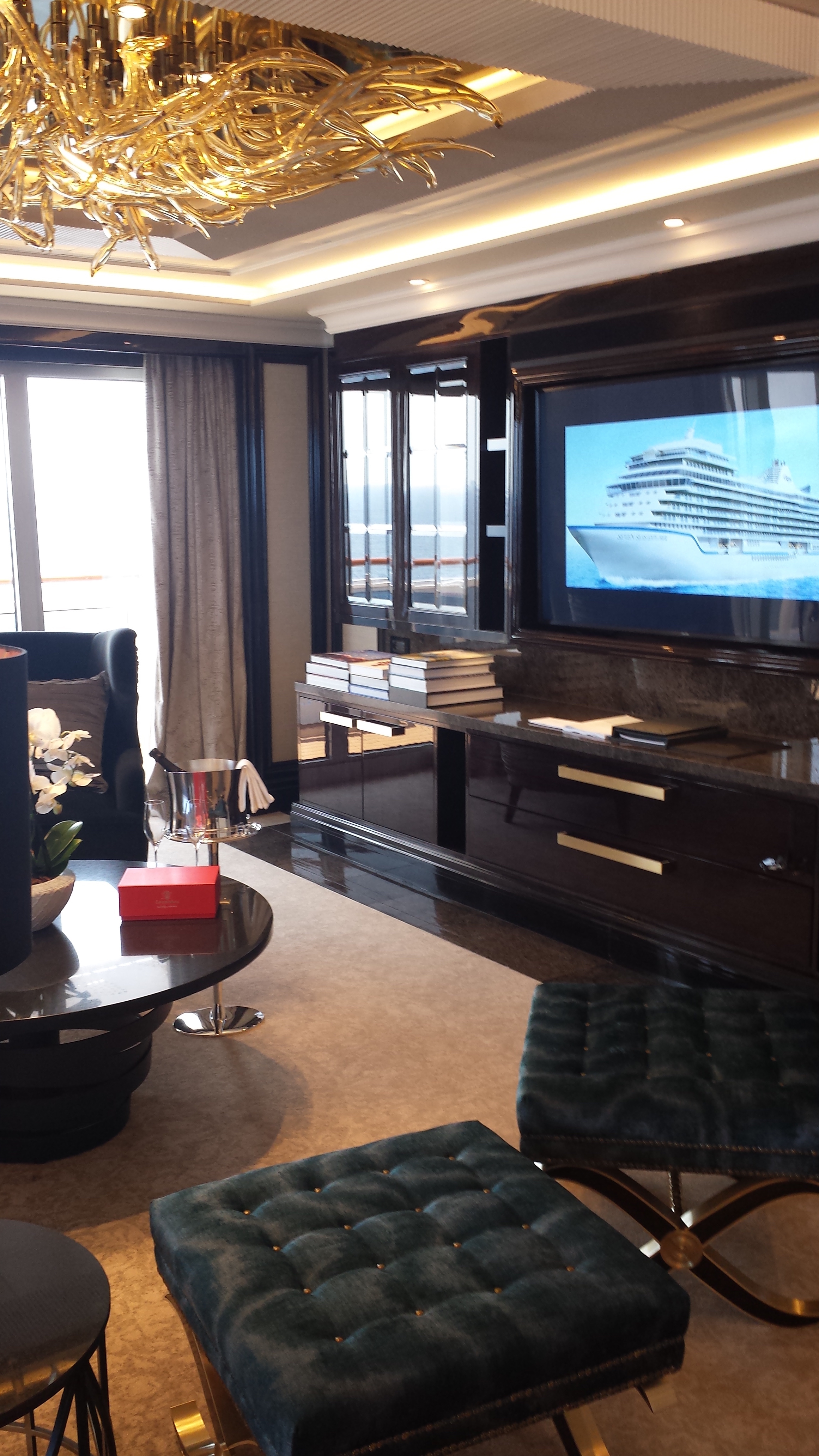 Day 3 our itinerary had been changed and we went to Sardinia instead of Florence – it worked out well as we had never been– and we opted to take a tour to the wine country. 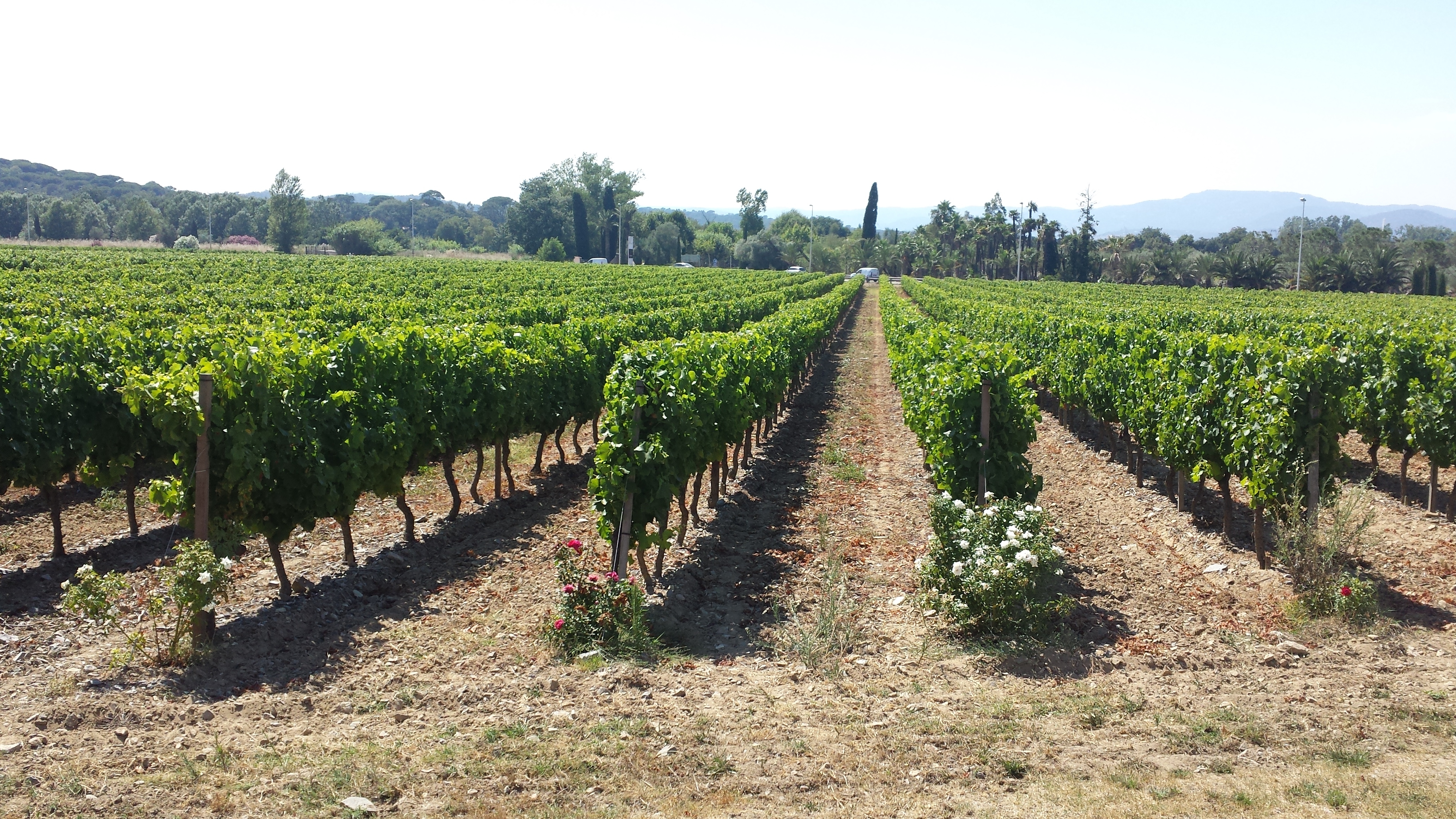 Day 4 we were in Toulon France – and had the opportunity to see the Seven Seas Navigator – this ship has been renovated to the standards of the Seven Seas Explorer – so I was pleasantly surprised when we got the tour. The ship tendered us across the harbor to where the Navigator was docked – so we did not have to get off and stand in the hot sun – it was nice and easy from one ship to the other. The ship is much smaller – and it was full – so we were only able to see a few cabins – I was very impressed with the public areas – they have done an outstanding job! 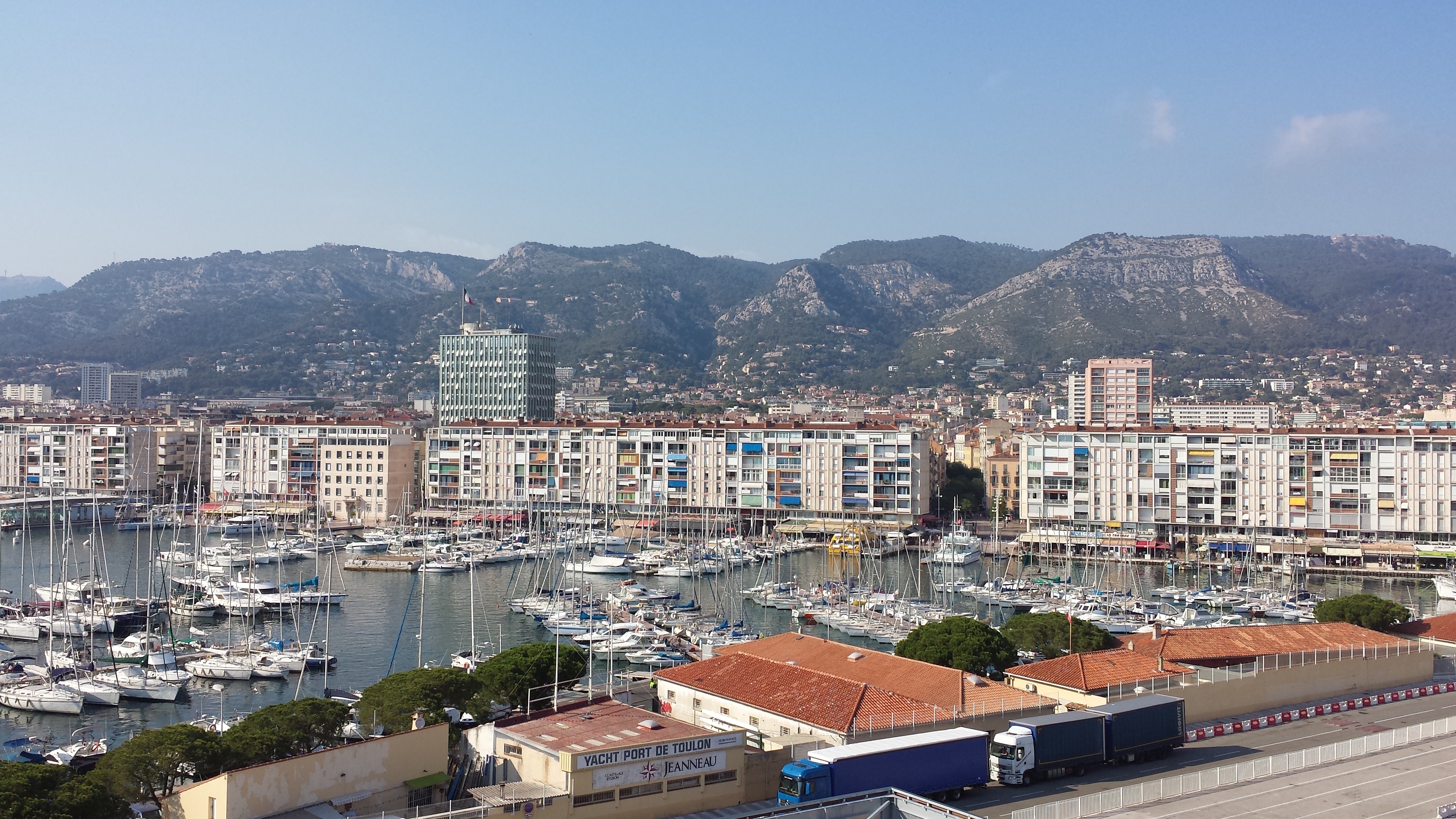 Back on the Explorer for a quick buffet lunch – we then headed off on our included tour. The very nice touch was as we were leaving the ship – there is a cooler with bottled water to take on a complimentary basis. The buses were lovely and new – and Air Conditioned – and the tour guides very informative – and the tour itself was very nice – we went to Aix en Provence – which I had missed on my previous trip to France and it is definitely worth a visit. 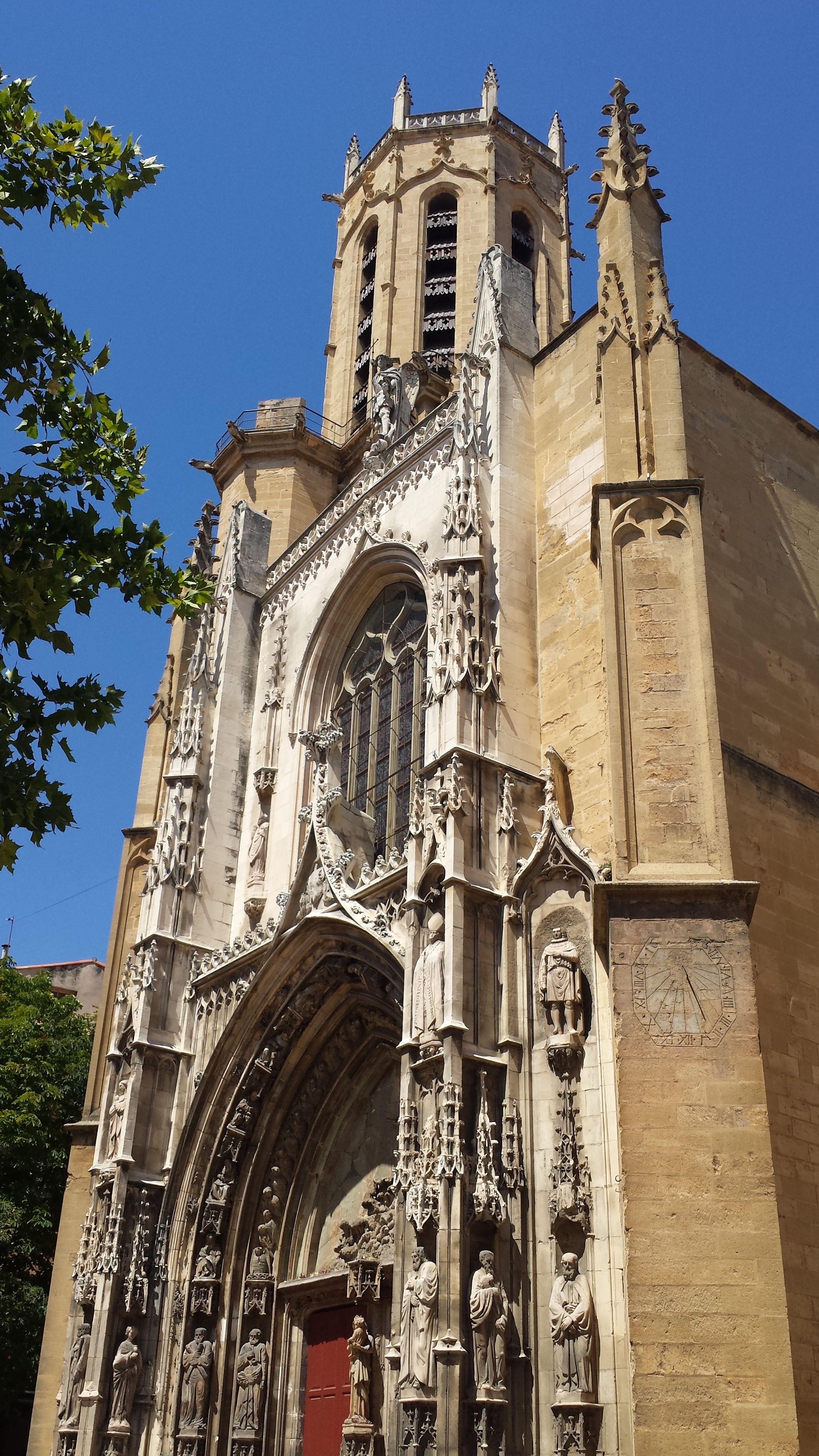 Our second night dining was at the Sette Mara – which is a part of the La Veranda – but turns into an alternative dining at night.The service and food here was also excellent!

On our last evening Regent actually closed all of the restaurants to present a fantastic on deck dinner and BBQ – which was amazing. This is when they bring out the entire staff – and introduce the various departments – it was dining under the starts as we have never seen it! The choices of food were pretty much anything you could think of – BBQ steaks and ribs, lamb and chicken – seafood galore – pasta, pizza, pate, various cheeses from around the world – the presentation was stunning. Regent does know how to put on a party and that was definitely one of the highlights! 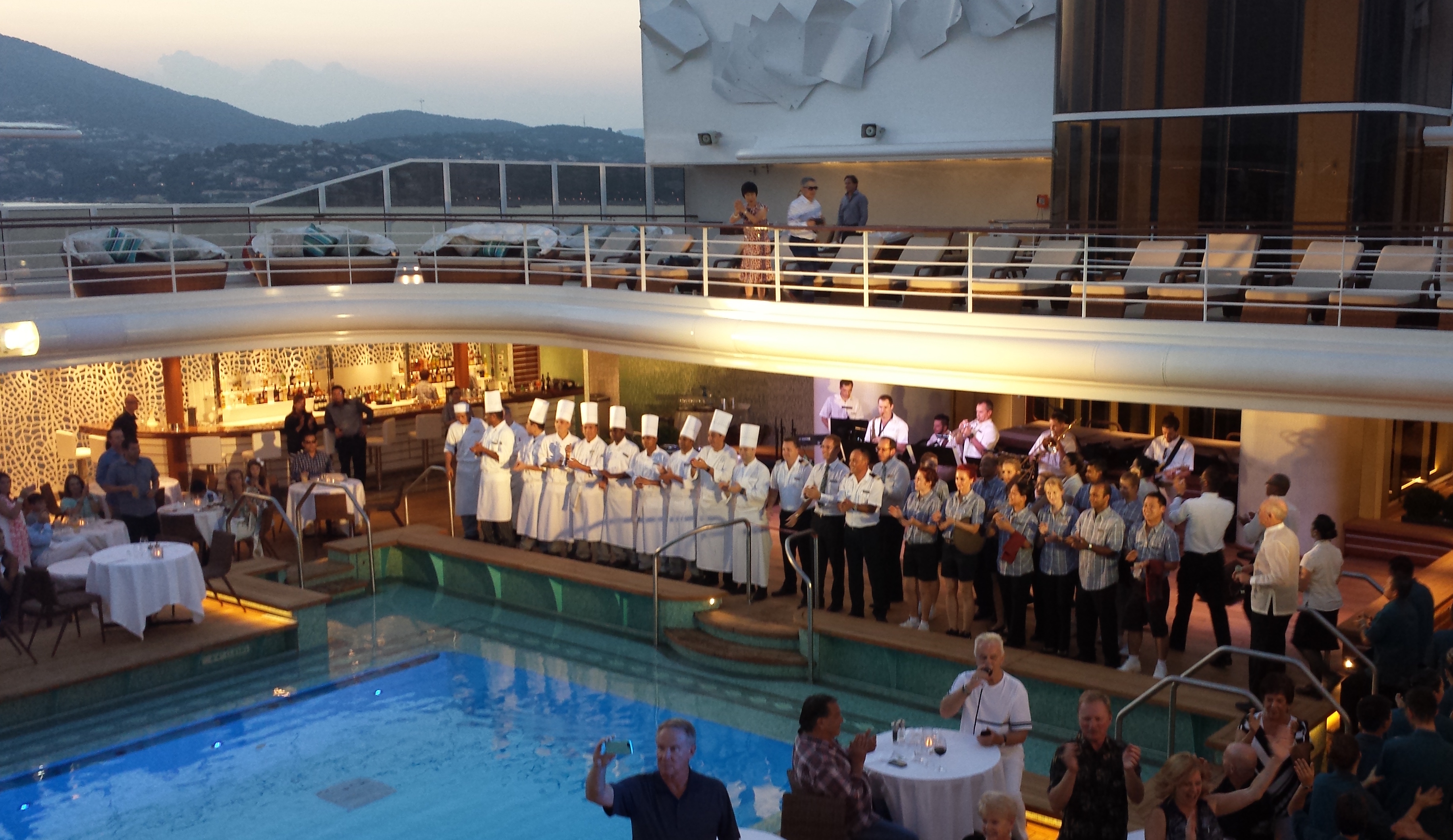 There was also another event early in the cruise – it was the ‘fish buffet’ – held out on deck . My husband loves seafood – so he insisted we go down to deck 4 and check it out- and I can certainly glad we did. There were crates of oysters, crab legs, and other seafood – a large container of caviar – which was amazing – there was sushi – as well as a hot buffet – with everything from Lobster tails to pasta – and various ‘tastes’ presented beautifully. The large R carved in ice as also very impressive – all of the staff were genuine and happy to see us – and the wine they were serving was delicious and non stop! 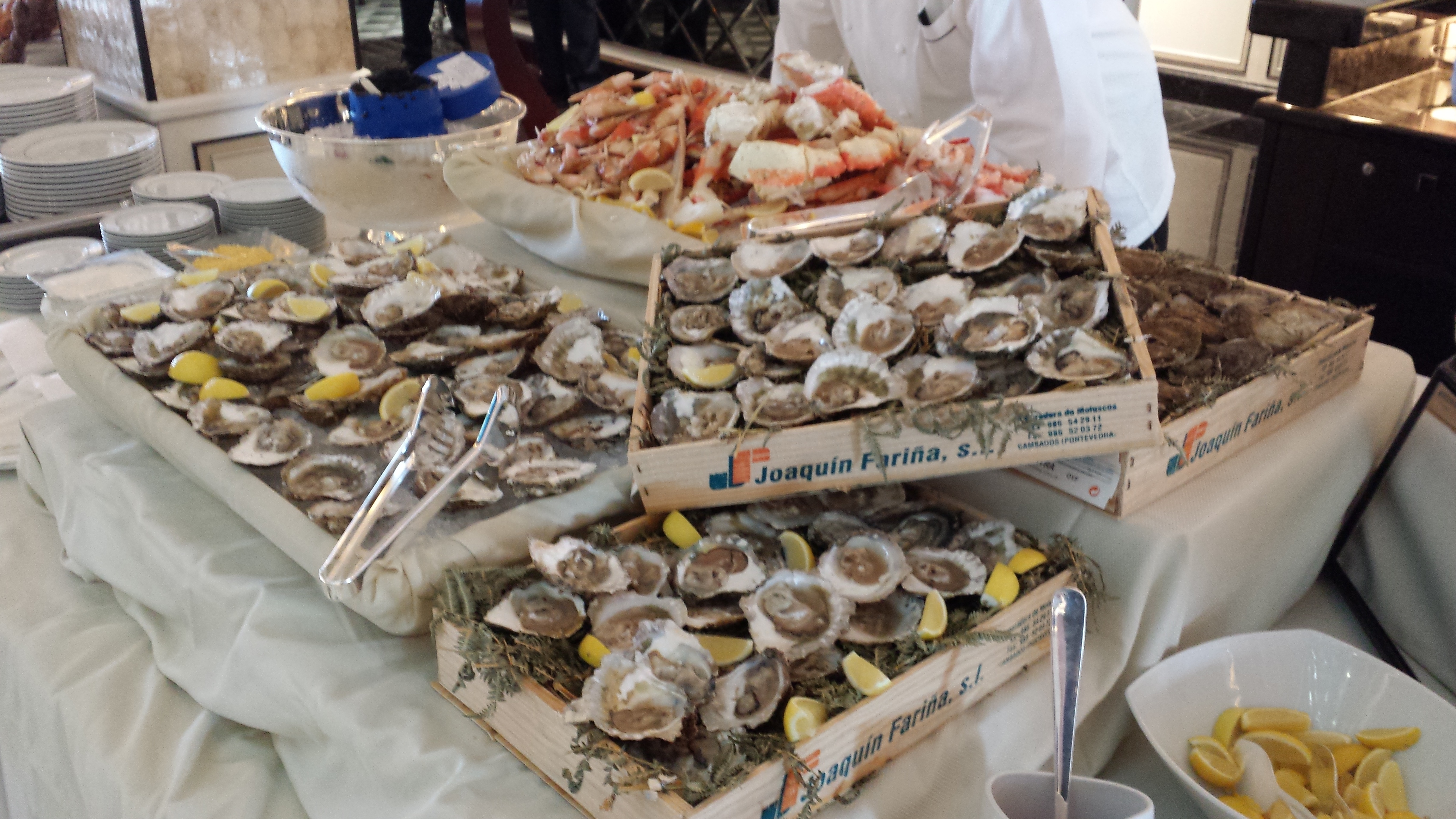 Five days is not enough time to utilize everything on the ship – we did not get a chance to participate in the Culinary school – they have a Culinary Arts Kitchen specifically built for this ship – with 18 work stations – also the Observation lounge – which doubles as the night club as well as the room where they serve high Tea - the room itself is beautiful – we got to see inside of the library – but it was not quite open yet – but did look like there was a very good selection of books and games. The Coffee Bar – has a lovely selection of light snacks during the day – you can have a self service coffee at the expresso machine or order one from the bar – which are made by the specially trained baristas!

The staff in the Meridian Lounge – were extremely friendly – and accommodating – helpful – it really seemed like a dream – everyone was so happy in their jobs and friendly. One very nice thing was the evening appetizers in the Meridian – and of course – the wine – with a number of different varieties to choose from. 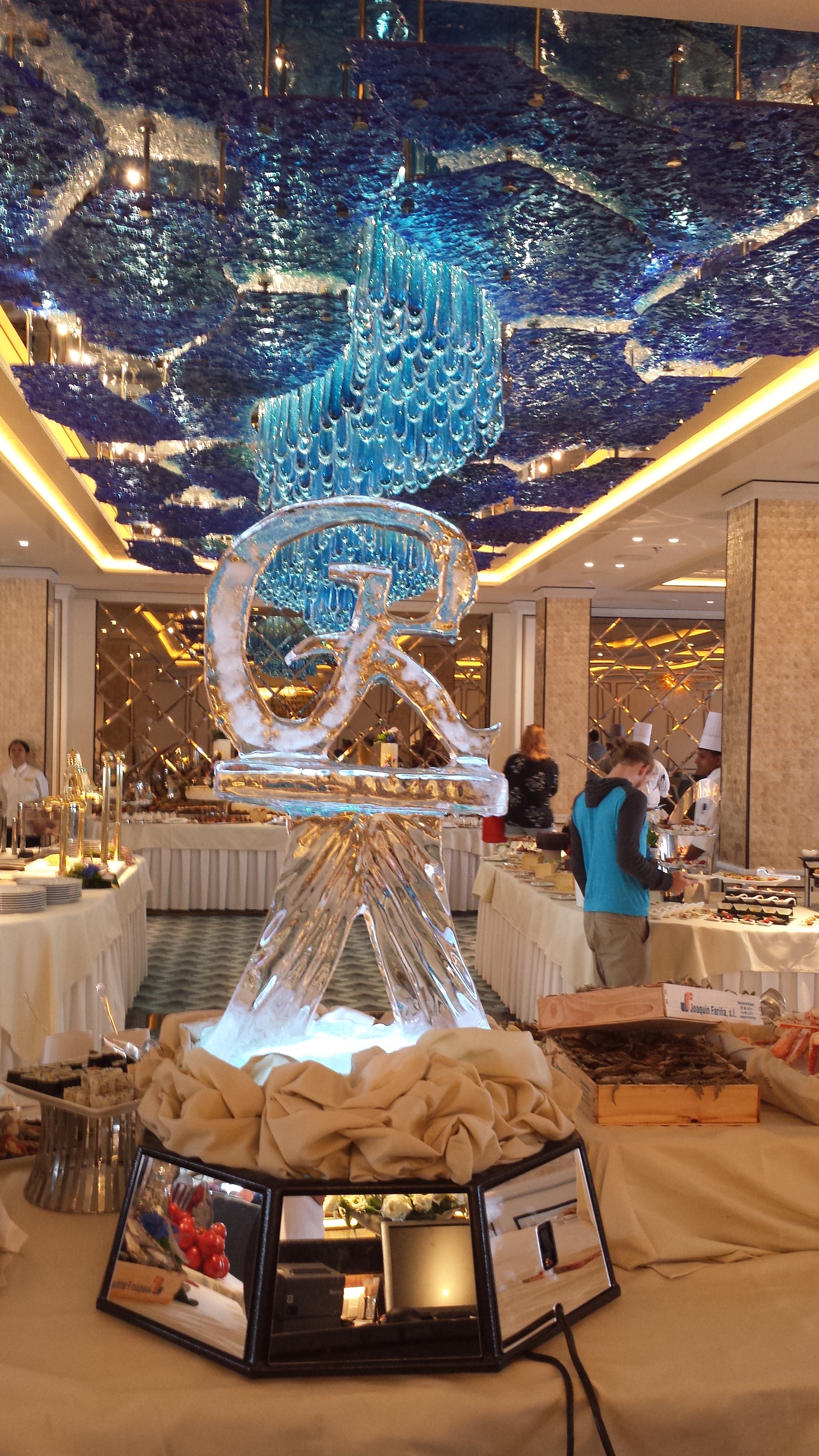 The Canyon Ranch spa is quite amazing onboard – it was huge and has everything from the treatment rooms / sauna’s to the cold room – they gym is one deck up – and has a fridge stocked with water as well as Gatorade.

This was my first time onboard a Regent sailing – and It definitely will not be my last! The service was outstanding – even though this was a ‘pre-inaugural’ sailing – they did everything in their power to make it an amazing experience! 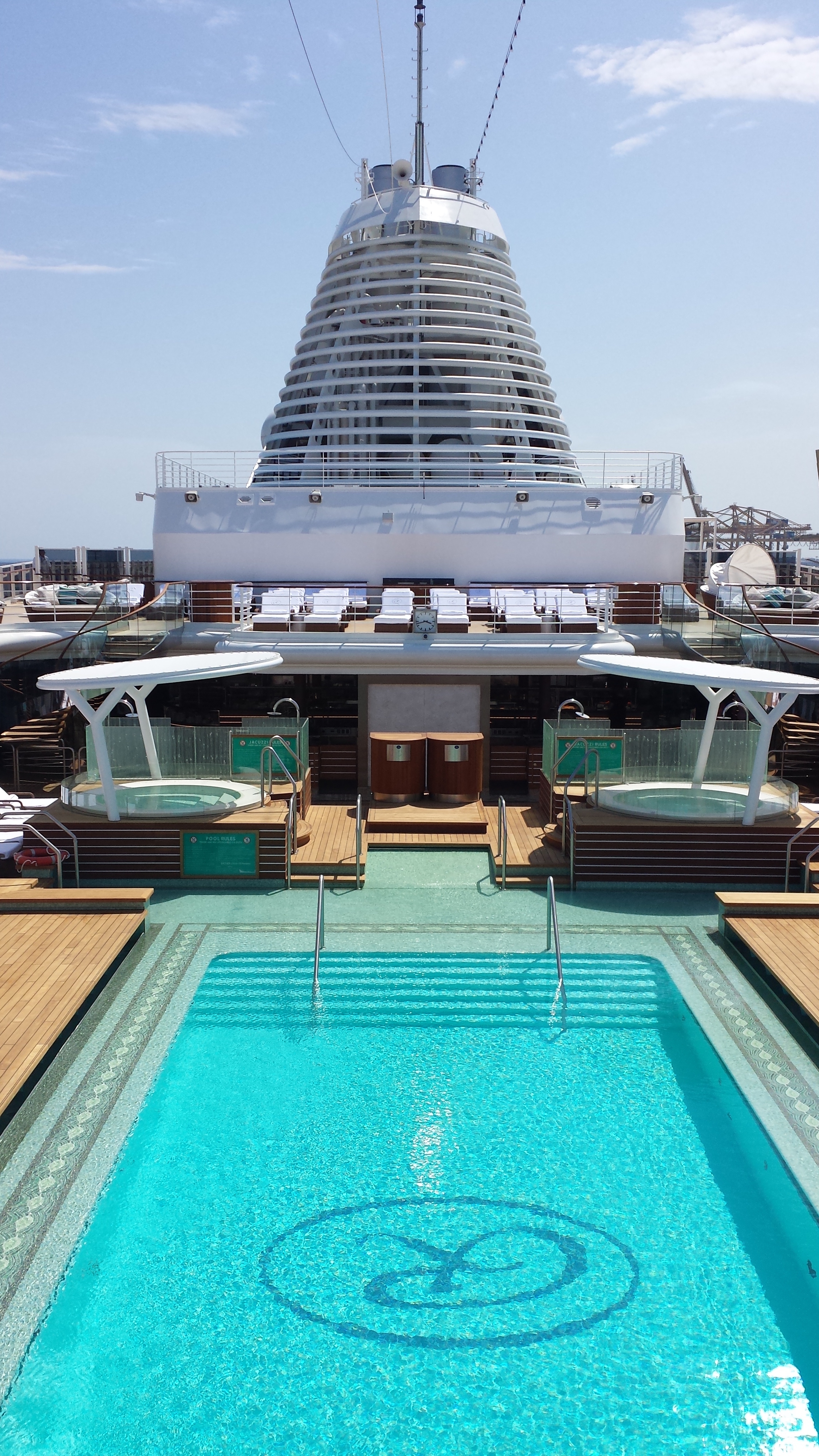 The Cruise director was also very friendly and I asked him about the solo travelers program – he took the time to tell me about how much Regent cares about their guests and that if they are travelling Solo – they ensure there is always someone there to dine with – go to the show with or generally ensure the Solo’s are having a great cruise experience. 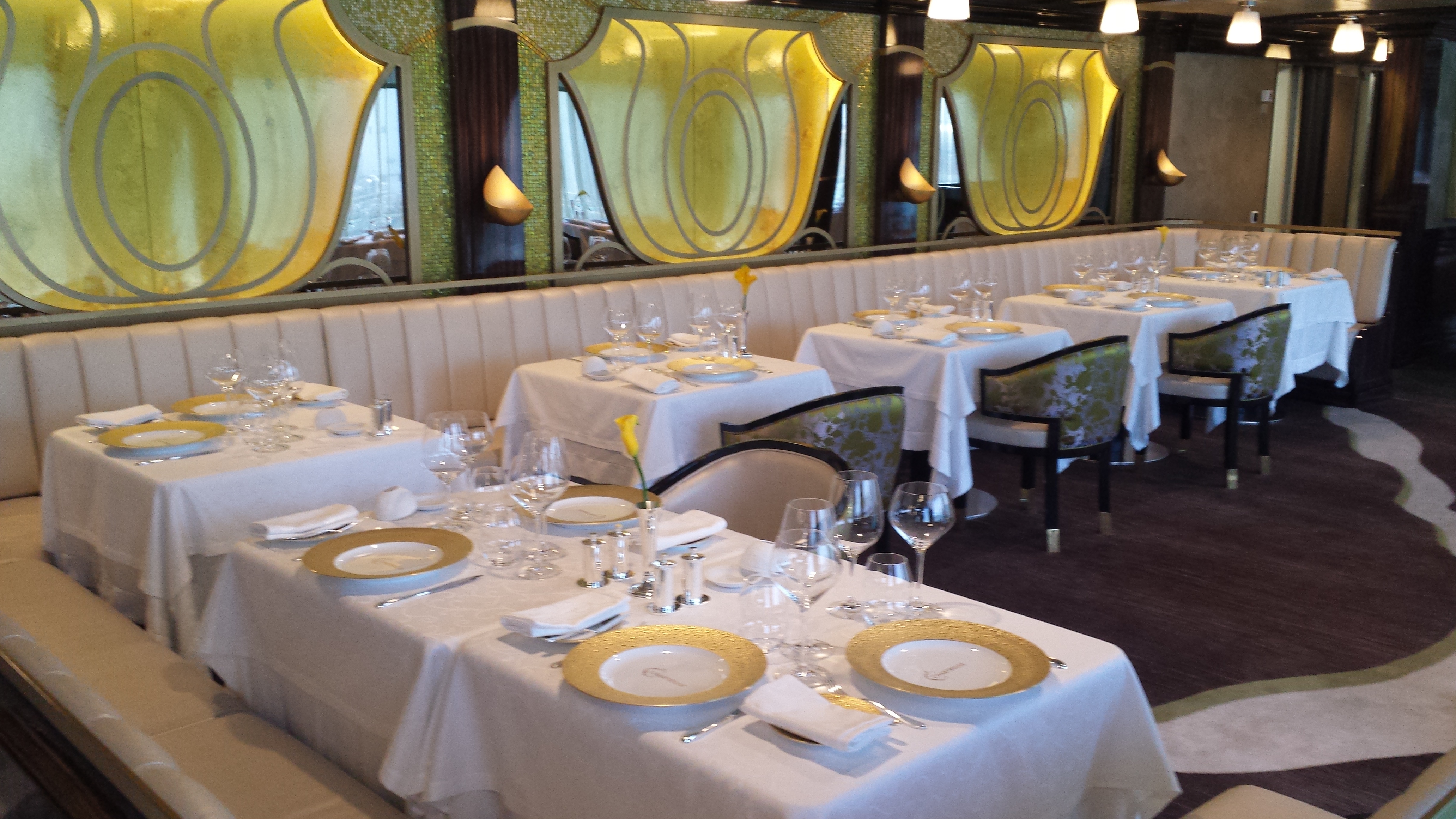 It was very sad disembarking the ship –even though it was extremely well coordinated and smooth – The ship was so beautiful that it made it hard to leave – but one of the nicest things is not having a huge bill at the end of the sailing – because everything was included! 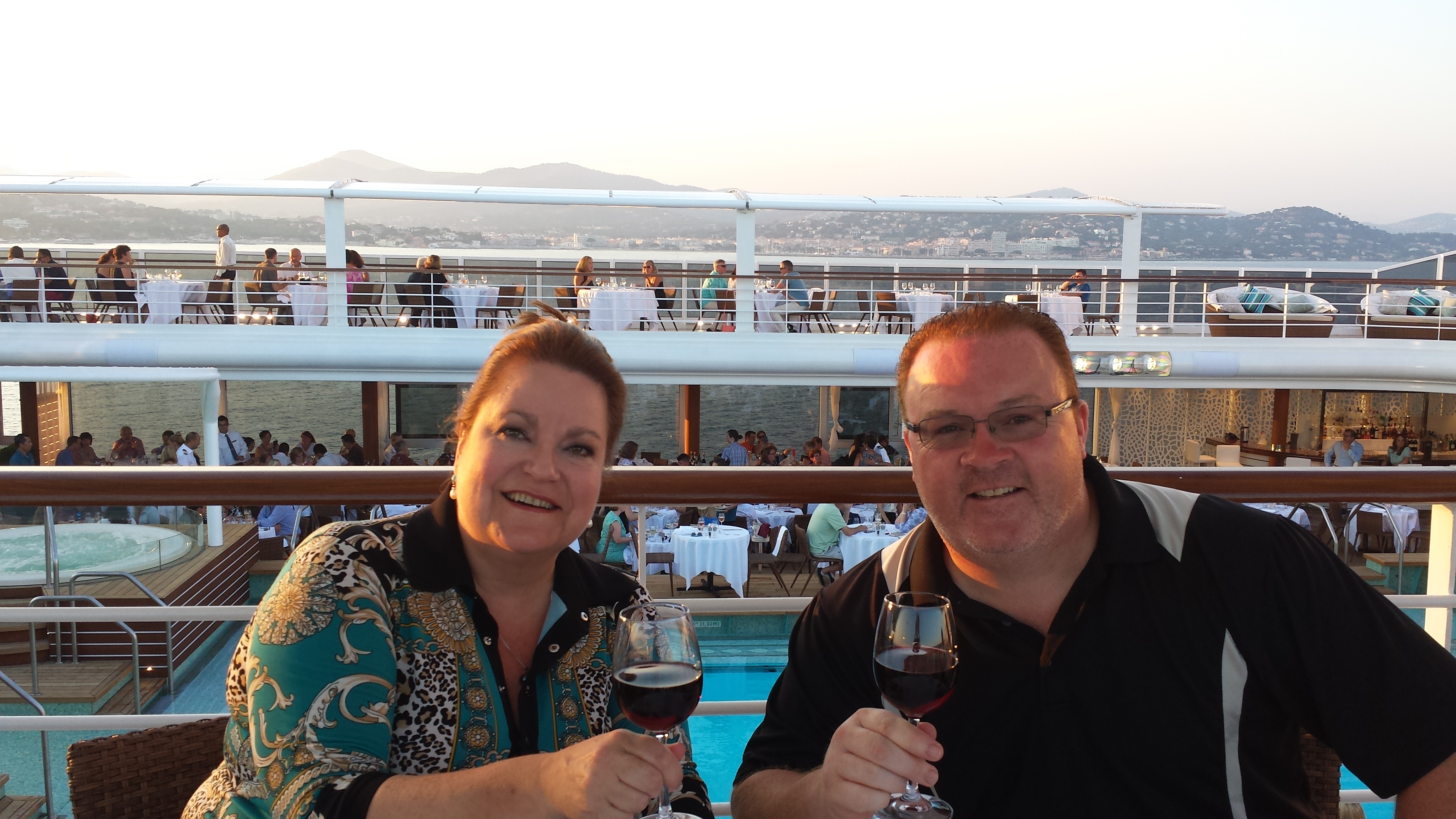 If you have ever thought about a Regent Cruise and are unsure – please feel free to call me – I would be more than happy to share my thoughts and experience with you! You can reach me by calling 604-736-7447 and asking for Dana.

Till the next time – Regent – you will be in my dreams!