North South Travel is dedicated to demonstrating its commitment to corporate social and environmental responsibility by consciously promoting preferred partners who go the extra mile to help protect the planet.

Each year a panel of Virtuoso advisors nominates travel companies that shine in the arena of promoting sustainable travel and upholding its three pillars – celebrating culture, supporting local economies, and protecting the environment. The winners will be announced at this year’s Virtuoso Travel Week in August in Las Vegas. Here are the nominees:

The Fly One: Air New Zealand

The airline pegs its sustainability approach to UN guidelines, which means it has committed to reducing emissions and going carbon neutral by 2020, and plans to remove 55 million single-use plastics from flights this year. They partnered with New Zealand’s Department of Conservation for environmental projects such as relocating endangered animals, and it releases an annual sustainability report.

Good Foundation: Insight Vacations and Luxury Gold
Travel companies Insight Vacations and Luxury Gold safeguard the cultural heritage of communities they operate in with experiences such as a visit to an Italian weaving cooperative. The TreadRight Foundation, the nonprofit arm of parent company The Travel Corporation, supports scores of sustainable tourism projects around the world, with its mission to “Make Travel Matter” by protecting people, wildlife, and the planet.

Mongolian Mission: Nomadic Expeditions
An emphasis on local community values and long-term environmental sustainability guides Mongolian tour operator Nomadic Expeditions. By rigorously educating its own guides and training college students to work in the tourism industry, the company has helped shape tourism’s future in Mongolia. Its conservation efforts range from snow leopard protection to cultural preservation, including the famed Golden Eagle Festival, which preserves the country’s falconry tradition and will celebrate its 20th anniversary in October. 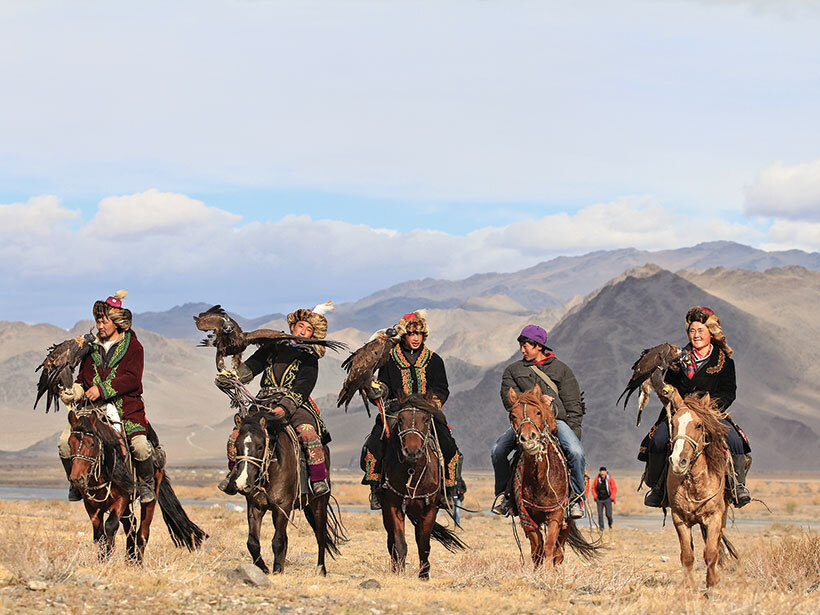 African Endeavors: Londolozi Private Game Reserve
At Londolozi Game Reserve in South Africa’s Kruger National Park, sustainability efforts are driven by the philosophy of ubuntu, which roughly translates as: “I am because we are.” The reserve is transitioning to a battery-powered vehicle fleet, has established a medical clinic, and helped found an education program and an animal-tracking academy, creating job opportunities for rural people.

Ocean Blue: Soneva Fushi
The 62-villa Soneva Fushi, a carbon-neutral resort in the Maldives’ Baa Atoll UNESCO Biosphere Reserve, honors the environment through its state-of-the-art Eco Centro Wasteto-Wealth program, which recycles 90 percent of the resort’s waste. The Soneva Ocean Stewards program teaches local children to swim and how to protect the ocean.

A Ranch with Conscience: Vermejo, a Ted Turner Reserve
Vermejo, A Ted Turner Reserve resort lives and breathes Turner’s conservation mantra: “Save everything.” The 550,000-acre ranch in northern New Mexico has contributed to the repopulation of American bison and brought the area’s Rio Grande cutthroat trout back from the brink of extinction, while also supporting local communities and economies. – Keriann Ashley-Chase