Our time in Okavango Delta

We got here in another tiny plane, flying from an airstrip at Khwai, just outside Moremi Game Reserve, to one about 30 minutes’ drive from Xaranna. The flight was over the eastern Okavango Delta, which was a lot drier than you would think a delta would be, but it looked pretty cool.

The Okavango Delta is the world's largest inland river delta, covering 15,540 square km in northern Botswana. It's fed by rivers in the southern Angola highlands. It rains there in the (southern hemisphere) winter. Three months later that water has flowed down the Cuito and other rivers, through Angola and Namibia, to reach the Delta, where it spreads out over northern Kalahari Desert before just petering out. The water never reaches the sea.

Xaranna is a permanent camp run by & Beyond Travel. It's located in a huge 673,000-acre private concession in the southwest Delta, leased by & Beyond from the Botswana government. & Beyond also has two other lodges in the Okavango. A fourth, Xudum, burned down in a bushfire, of which there are a lot around this area. Xaranna is built along what's normally at this time of year a big lagoon. But this year, because the rains failed in Angola last winter, there was very little water in the Delta and the lagoon was shrunk to a large waterhole. Nobody seemed too worried about it; they expected local rain soon and a normal year next year.

Xaranna and Xudum are words in one of the indigenous "Bushmen" languages. The X is a "click" sound, made by putting the tip of your tongue against the backs of your upper front teeth and the front of your hard palate and then pulling it down. It's kind of like the "tsk tsk" sound you make to encourage a horse to move.

Benjamin Ndjavera was still with us, now acting as guide and driver. And we picked up a spotter, Tabona Shadrack. He’s from a village near Kasane; his parents are from two different tribes in Zimbabwe. He was a very good spotter and a pretty fun guy.

Xaranna made a very nice change from camping in the bush. There are nine big permanent safari tents, with electricity, flush toilets, indoor and outdoor showers, bathtubs and small pools off their decks. There's a restaurant / lounge area with a great view over a waterhole. The staff all speak English, but with more accents. The food was good. There is Wi-Fi, but it didn't work very well. 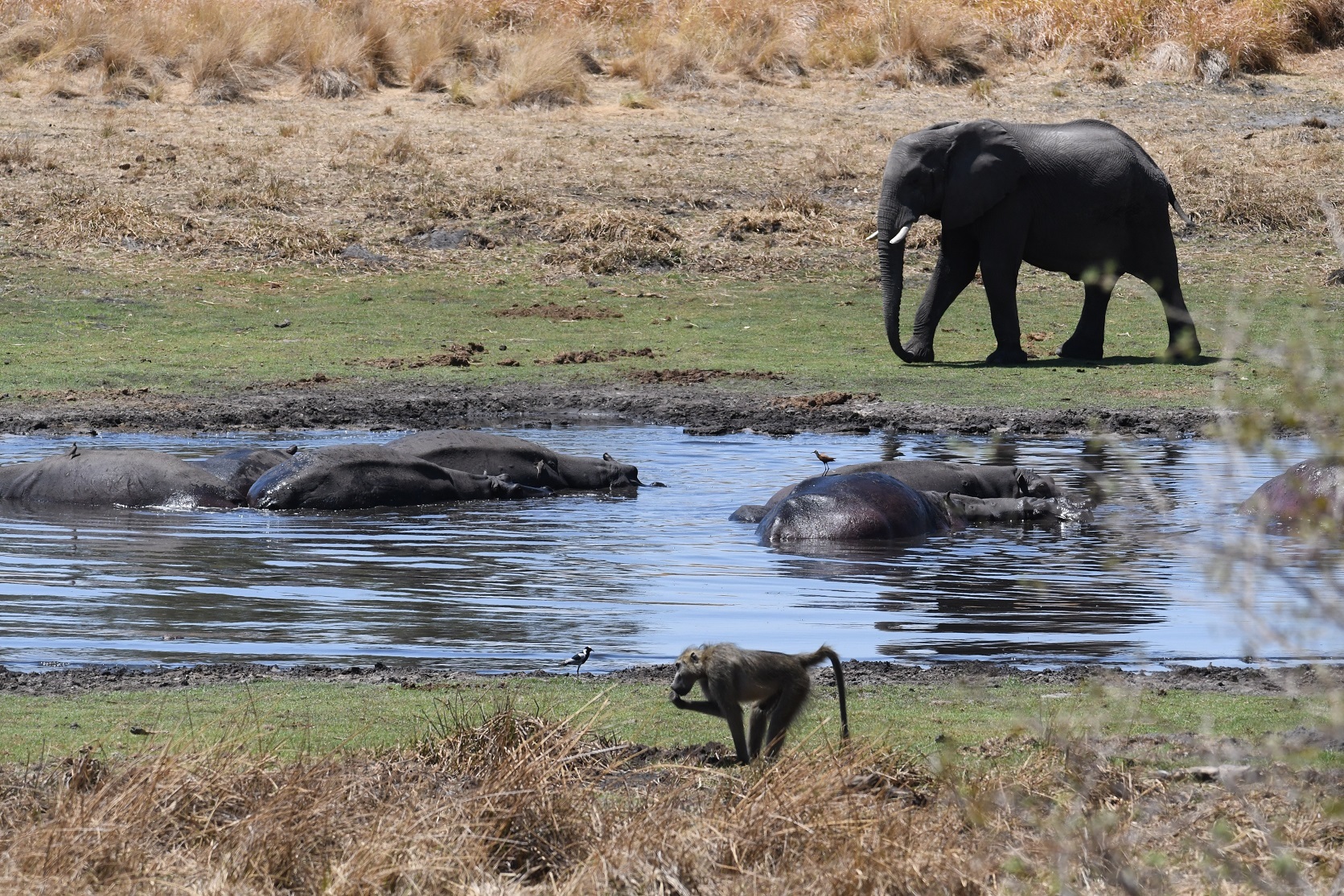 Like while we were camping, we went on game drives in the early mornings and evenings at Xaranna. But the best game viewing was probably from the lodge itself. At the waterhole we saw hippos, crocodiles, elephants, baboons, kudus, reedbucks, marabou storks, and wattled cranes, many of them at the same time.

The lodge isn’t fenced, so multiple times elephants walked up and started drinking out of the swimming pool in front of my tent. The first time, there were 7 of them at once! I was transfixed, it was funny and amazing. There were elephants walking past my tent several times and you could see them from the trails between the tents and the main building. Occasionally they would even block off the trails. Like at Mara Bushtops and Tarangire Treetops, you need an escort after dark because of this. We spotted a few other animals wandering around next to the trails. One time at night, me and Benjamin were able to walk right next to a baby bushbuck, which was really cute.

We did see some cool stuff on the drives. One day, we saw 70 hippos at a dry waterhole. That was kind of ridiculous. Maybe the most interesting thing we did on a game drive was to track where a leopard had killed a reedbuck and dragged it under a bush to eat, before some hyenas had driven the leopard away and dragged the remains of the reedbuck away to finish eating it.

Because this is a private concession we were able to do night game drives here, which we hadn't been able to do at Chobe or Moremi. At night we saw hippos on land, a rare African civet, and a hyena den, both without and with hyenas, among other things. We were able to just sit in the truck next to hyenas right outside their den. I keep being shocked by how easy it is to get so close to the animals.

After two days in Xaranna, we left Andrea and Andreas behind there and got in one more small plane along with Benjamin and some other guests to fly from the lodge’s airstrip to the town of Maun (where Benjamin is from and where we said goodbye to him), then an Air Botswana flight to Johannesburg, South Africa. After a wait, we took an overnight KLM flight back to Amsterdam. Then, after another wait, we took an all day KLM flight home.

I’ll be writing one more blog post to wrap this up, going over my final thoughts on the trip as a whole. See you then.