Experiences at the Maasai Mara by Kai Antle

Hello, welcome back to my travel blog. In this entry, I’ll be talking about my stay at Mara Bushtops in Kenya.

Mara Bushtops is a safari camp in the Maasai Mara. The Maasai Mara is the northern end of the great Serengeti Plain, the part in Kenya. Mara Bushtops’ motto is “Wild Luxury.” You do technically stay in tents, but they’re on permanent platforms with bathrooms, 24-hour electricity, Wi-Fi and hot and cold running water, so it’s much more luxury than wild. The food is very good, including the first local cuisine we’ve seen on this trip. The staff are very friendly and all speak English, although some of the accents take a bit of getting used to. I even had a butler called Mercy looking after me.

Mara Bushtops is actually in Isaaten Conservancy, a 15,000-acre property owned by the Maasai, the local indigenous people. Part of the Conservancy is reserved for wildlife, and part is “dual-use”, where the Maasai can also graze their cattle. It’s just north of the Maasai Mara National Reserve

We arrived at Mara Bushtops after leaving Borana, driving back to the airstrip (seeing plenty more animals, just like the drive in) and flying to another tiny airstrip. There, we met with our guides, had a snack, and drove in to the camp. Like the last time, we saw quite a lot of animals along the drive to the place we’re staying. Most memorably, a mother elephant right next to the side of the road, who we had to creep slowly past since she was very agitated by us going between her and her children on the other side of the road. That was kind of freaky.

Our guides here were Charles Mwaniki (guide / driver), a Kikuyu from near Nairobi, and Kuntayo “Daniel” Ole Purrengei (game spotter), a Maasai whose family compound was about 11km away (he said he walked home in about at hour – that’s really fast!). Daniel in particular was very good – friendly, knowledgeable, well spoken, interested in us. 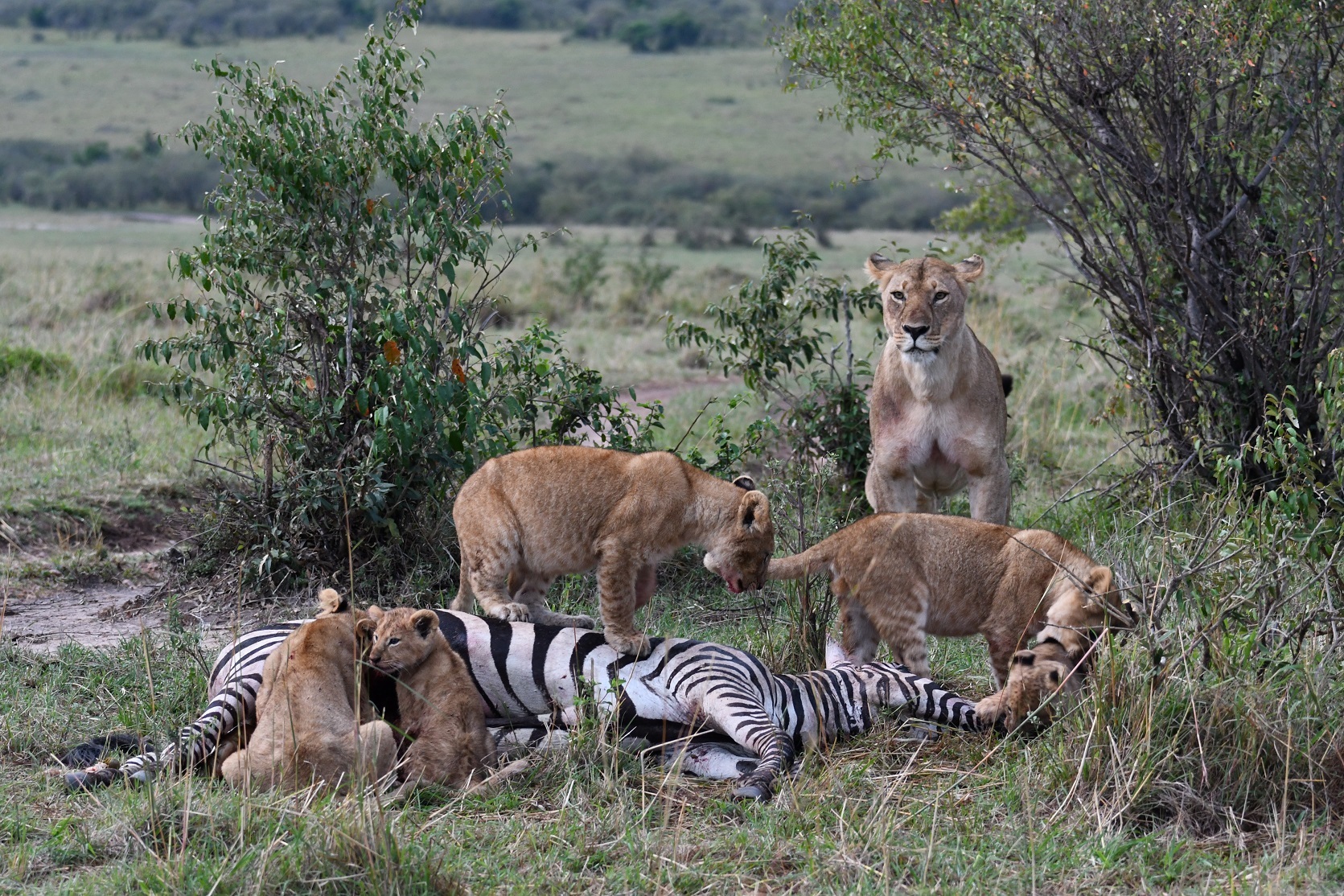 The thing about this system of staying in tents is that there are no barriers between you and the wildlife other than the tent walls, so when eating lunch on the balcony you can see animals gathering around the salt lick on the other side of a field, and animals wander around during the night. Over the course of our lunches, we saw various kinds of antelopes, buffalo, giraffes, and even elephants (including cute baby elephants). If was kind of surreal, to have them right there next to where we were staying. The animals were noisy at night, but I had a white noise generator so I didn’t mind. I didn’t even hear the elephant that walked through the camp near my aunt’s tent, which everybody else did, but I did see the damaged boma (thorn bush fencing) the next morning.

We spent most of our time at this camp going on game drives. One day we spent most of the morning going really far out into the huge, wide open plains of the Maasai Mara itself, where we got to see herds of wildebeest migrating. We also saw tons of other animals, including all the usual zebras and antelopes etc., but also a lot a predators and scavengers that we spotted while they were eating prey, including a pair of hyenas, a cheetah, and multiple groups of lions. Twice, we saw a lioness with a bunch of her cubs; one time they were eating a zebra while clambering all over it and falling off, the other time they were just lying around. Both times they were adorable and funny to watch.

Besides the game drives, another thing we did was take a hike with a guide and armed ranger up to Kakiya, a small cave on the mountainside, that had some old Maasai paintings in it. The hike up was pretty uneventful, but on the way down we ended up between a herd of elephants and a herd of buffalo, and had to get in the truck to drive home safely. My dad thinks “between elephants and buffalo” should be the new “between a rock and a hard place”.

We also visited a Maasai “village” – which was really a compound inhabited by a single extended family, the family of a guy named Siimiren Ole Nkuito. It was pretty interesting.The village was very small and rustic, but the people were friendly and greeted us with traditional singing and dancing. I participated in a jumping contest with some of the men, and did pretty well. We also bought some souvenirs from them.I got a wooden rhino.

Next we’re headed to Acacia Farm Lodge, near Ngorongoro Crater, across the border in Tanzania. 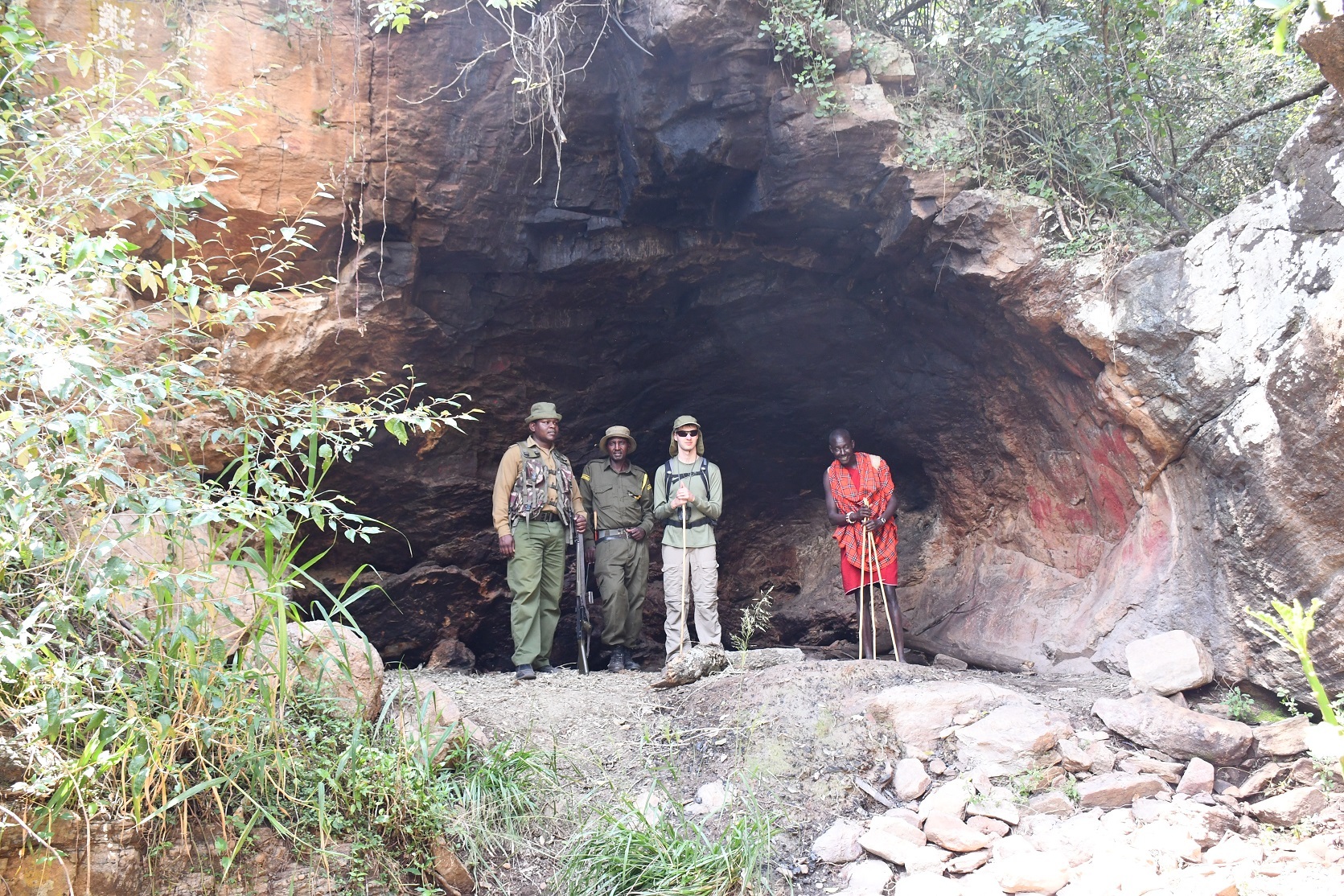